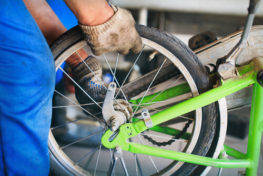 Many residents across the United States ride bicycles for transportation, for health, and for enjoyment. In most states, a bicycle is considered a vehicle and the cyclists are required to follow the same rules of the road as cars and other types of vehicles. Bicyclists, however, are much more vulnerable to injury or even death as they are sometimes not as visible as a car and in many cases, motorists are simply not paying attention. Some states or cities are considered to be more bicycle-friendly while others prove to be a nothing but nightmarish for folks who would rather pedal than drive.

At a national level, as reported by the National Highway Traffic Safety Administration (NHTSA), in 2012, 726 individuals were killed in bicycle/motor vehicle crashes. Additionally, the number of bicyclist injuries was an estimated 49,000. Bicycle accident statistics, in particular, are difficult to calculate or track and most experts believe that the statistics themselves are low due to the fact that only a fraction of bicycle crashes causing an injury are recorded by law enforcement. Typically, as in states like Texas, only bicycle accidents involving a fatality are reported. Given the increase of cyclists taking to the streets of large Texas cities, it can be assumed that more cyclists are injured in an accident involving another vehicle, such as a car. Using a bicycle as a mode of transportation has many benefits and cyclists have the right to share the road with other vehicles. Unfortunately, not everyone shares the same “share the road with bicycles” attitude and many cyclists are harassed, thrown off their bikes during “near-miss” accidents, or hit by another vehicle. If you are an avid cyclist and have been injured in a crash involving another vehicle, the experienced team of lawyers at Herrman & Herrman, P.L.L.C., will fight for your safety and the injuries you sustained.

The NHTSA reports that in Harris County, Texas (Houston area), seven bicycle fatalities took place each year from 2008 to 2010, followed by ten cyclist deaths in 2011, and eight in 2012. The latest statistics for 2013 report that a dozen Houston area cyclists were killed, although one was not involving another vehicle.

In Austin, the capital of Texas, three bicyclists were killed in 2012 and one in 2011. While the numbers may seem small in comparison to the fatalities that occur during a car accident, bicycle accidents, just like most vehicle accidents, are preventable. In order to avoid becoming injured or killed while riding your bicycle, the Texas Department of Transportation reminds bicyclists and drivers to follow all the rules of the road, including proper signaling and stopping for lights. Bicyclists should always wear visible attire, in addition to a helmet, and drivers should make a greater effort to pay attention to bicyclists and make room on the road.

We Will Protect You

While a helmet cannot protect you from the careless drivers that fail to share the road with cyclists, we can protect you and help you need to seek compensation for your injuries if you were injured in an accident involving another vehicle. Our experienced staff has the knowledge and confidence to take on a complex case.

Sustained a bicycle accident injury? For more information or to schedule an appointment with an experienced Texas bicycle accident lawyer, please contact us first! Our firm has offices in the following locations: Corpus Christi, Corpus Christi South Side, Brownsville, McAllen, San Antonio, Houston, and Ft. Worth, TX.

"I will use Hector again if needed. He took care of me and made me feel comfortable throughout my entire case."
- Linda
Linda
about Linda
5 / 5 stars
★★★★★
View More Testimonials