Neurological Injuries After a Car Accident 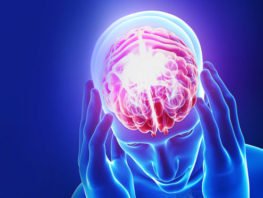 You may be struggling with severe pain and have trouble focusing after a car accident or motorcycle accident. You may develop headaches, migraines, tingling and numbness, or other symptoms in the days and weeks following the crash.

The symptoms may have been hardly noticeable at first, but gradually have gotten worse. These symptoms may be related to nerve damage and neurological issues resulting from the car accident.

A loved one may notice symptoms. People with neurological injuries may require specialized medical care and rehabilitation for a period of months.

If you or your loved one has developed unexplained symptoms after an auto accident, you may have a neurological injury. You should see a doctor and explain the onset of the symptoms after the motor vehicle accident.

A compassionate lawyer at Herrman & Herrman can provide guidance about seeking compensation for nerve damage as part of a car accident compensation claim. If someone else caused your injuries, you should not be stuck with the medical bills.

At Herrman & Herrman, our experienced attorneys understand the long-lasting effects of neurological injuries. Let us review the details of your injury-free of charge and discuss your legal options.

Injuries to the brain or spinal cord affect the central nervous system.

Injuries to nerves that cause balance problems or weakness, numbness or pain to the hands or feet may involve the peripheral nervous system. Trauma also affects the autonomic nerves involved with body systems.

Neuropathy
Neuropathy usually refers to damage to nerves in the peripheral nervous system affecting the ability to maintain balance, walk, grasp objects or perform other motor skills. Neuropathy can be caused by trauma from physical injuries. For example, broken bones from a collision, motorcycle accident or bicycle accident can put pressure on nearby nerves or compress nerve fibers and cause pain or numbness.
Radiculopathy
This condition is caused by damage to or compression of nerves as they exit the spinal column. The symptoms include pain, numbness, weakness in the arms or legs or pain that radiates through the lower back and limbs. Radiculopathy is most commonly observed in the lower back and in the neck. It may result from a fall, car accident or sports injury.

Some neurological disorders are the result of infections or diseases such as Parkinson’s disease or multiple sclerosis that affect the nervous system.

But many are caused by some form of trauma that causes damage to the head, spinal cord or other parts of the body. 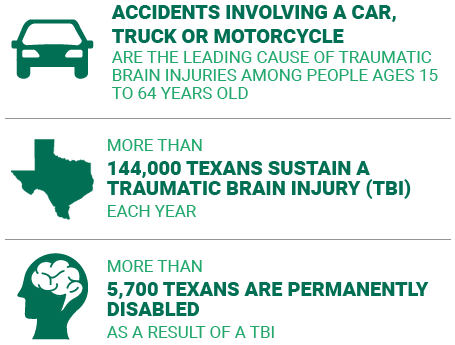 Head injuries occur with alarming frequency on the nation’s roads, despite the added safety features in today’s vehicles. While seatbelts are now found in all new cars and trucks, there remains little protection for the head and neck.

And since even the most minor accidents can result in the human body being whipped back and forth, it should come as no surprise that head trauma is so common.

Automobile accidents and other motor vehicle accidents are the sources of many neurologic issues. Traffic accidents involving a car, truck or motorcycle are the leading cause of traumatic brain injuries among people ages 15 to 64 years old, according to the Brain Injury Association of Texas.

Trauma to the head and neck is common in high-speed collisions. The violent impact of a collision can cause the brain to be thrown around inside the skull.

That can cause bruising of the brain and stretching and tearing of nerve fibers that send signals between the brain and the rest of the body.

As a result of the introduction of seat belts, airbags and other safety innovations, many people now survive serious accidents that would have been fatal and are living with brain injuries.

More than 144,000 Texans sustain a traumatic brain injury (TBI) each year and more than 5,700 Texans are permanently disabled as a result of a TBI, according to the Brain Injury Association of Texas, an advocacy group. More than half of car accidents causing TBIs to involve an alcohol-impaired driver.

In crashes involving cars and bicycles, injuries to the head are the most common type of serious injury, underscoring the importance of wearing a bicycle helmet. A hard blow to the head can cause a concussion or a more serious brain injury.

If you or your loved one has sustained a brain injury as a result of an accident caused by a drunk driver, you may have a legal right to hold the drunk driver accountable and seek compensation through a personal injury claim. The at-fault driver should be held liable for your neurologic injuries and should provide compensation to cover your injuries, pain and suffering and other losses.

Our attorneys at Herrman & Herrman have successfully handled thousands of car accident claims for clients. Let us review the details of your accident and discuss how we may assist you.

While much of the focus on whiplash injuries emphasizes the damage to soft tissue, the sudden movement of the head and neck impact much more than the muscles and tissues that support the head. The human brain is not welded to the inside of the skull but instead, floats within it.

The jarring impact of a crash can cause the brain to be violently thrown around the skull, which can cause bruising and stretching of the nerve fibers that send signals back and forth between the brain and the body’s cells.

When the head is whipped so hard that it makes contact with the windshield, steering wheel or other objects, the brain’s impact within the skull can be even more violent. In many instances, the brain moves forward and backward in the skull, injuring everything from the frontal and temporal lobes to the occipital lobe.

Patients who suffer these types of injuries from whiplash can be faced with a variety of complications. The circulation can be disrupted due to swelling in the brain, a hematoma can develop, and some patients can even lapse into unconsciousness or become comatose.

Often, these symptoms do not fully manifest until days after the event. Studies indicate that simple clinical diagnostics are typically insufficient for early detection of these types of problems, particularly in cases where secondary headaches from hematoma develop in the aftermath of this type of trauma.

Why See a Neurologist After a Car Accident?

Head injuries occur frequently as a result of the impact of car crashes, truck wrecks and motorcycle crashes. It is important to seek medical treatment after a traffic accident, especially if the impact of the collision caused you to hit your head.

You may have sustained a concussion or a more serious head injury. Closed head injuries involving brain bleeds may have no outward signs of injury to an untrained eye.

A neurologist is a physician who treats injuries and impairments that affect the brain and spinal cord that comprise the central nervous system. Your primary care doctor may refer you to a neurologist if you are experiencing symptoms that suggest neurologic issues.

A medical specialist, a neurologist will conduct a physical examination and may order diagnostic tests to try to determine what is causing your symptoms. The neurologist may order imaging tests that look for problems with bones, nerves, disks or the spine.

If the doctor suspects a brain injury, the doctor may order an electroencephalograph to record electrical activity in your brain to assess brain function.

The neurologist will develop a plan to treat the injury after developing a diagnosis. Many types of neurologic injuries caused by trauma can be treated effectively to avoid permanent impairments.

Reasons You May Want to See a Neurologist

Brain injuries are classified by the extent of the damage as mild, moderate or severe. Many symptoms of a brain injury may not be apparent immediately after an accident. It is important to inform your doctor of any symptoms you have experienced since your accident including:

People who suffer moderate to severe brain injuries may show the symptoms listed above as well as more pronounced symptoms such as slurred speech, vomiting, memory loss and seizures.

Neurological Problems After a Car Accident

Family members who interact with a person who has suffered a brain injury often observe a personality change in the brain injury survivor. The person may experience depression and anxiety, problems with concentration, changes in temperament, elevated fears, and problems with judgment.

A brain injury may trigger psychological reactions and biochemical disruptions in the brain. An individual who has survived a serious car accident may experience post-traumatic stress disorder (PTSD). Many individuals who sustain brain injuries end up needing psychiatric care and extensive rehabilitation.

If you have suffered a head injury in a car accident, you may feel confused and have trouble focusing. It is often difficult for people who have been in serious car accidents or motorcycle accidents to deal with the insurers, medical personnel and others after an accident that causes neurological issues.

Pain, fatigue and impaired concentration can reduce anyone’s ability to navigate the legal process to resolve an automobile accident. If you have sustained a neurological injury due to a motor vehicle accident, it is important to contact a Corpus Christi or McAllen car accident attorney who can ensure that your interests are properly represented throughout the recovery process.

Serving the U.S. and all of Texas with offices in
San Antonio, Corpus Christi, McAllen, and Brownsville.
YES OR NO