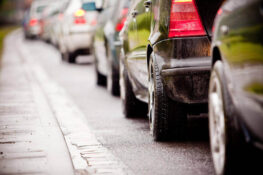 If you have been injured in an accident on I-45 and someone else was at fault, our compassionate attorneys understand the ordeal you are experiencing. You may have a legal right to seek compensation from the at-fault driver’s insurance. You should not be responsible for medical bills resulting from an interstate crash caused by another motorist. But you’ll need legal help to pursue full compensation.

It’s important to understand your legal options after a serious accident and whether you have a valid injury claim. Discuss the situation free of charge with an I-45 accident lawyer at Herrman & Herrman, P.L.L.C. At our law firm, we have the knowledge and skills to help you pursue full compensation for your losses. Get in touch with us today for a courtesy consultation.

I-45 is an interstate that runs from Dallas through Houston to Galveston and the Gulf of Mexico. The stretch of highway between Houston and Galveston is commonly referred to as the Gulf Freeway. Despite being designated an interstate, the entire length of I-45 is located within Texas. I-45 is approximately 284 miles long.

I-45 passes through numerous small Texas towns on the route from Houston to Dallas. These towns and suburbs include Conroe, The Woodlands, League City, Huntsville, Spring, Madisonville, Centerville, Fairfield, Ennis, and Corsicana. The speed limit on I-45 is typically 70 miles per hour, but the Texas Transportation Commission has set a speed limit of 75 mph on certain rural sections of the highway.

Major junctions along I-45 include Beltway 8 and Sam Houston Tollway, I-10 in Houston, SH-99 Toll near Houston, Hardy Toll Road in Spring, US-190 in Huntsville, I-20 in Dallas, and I-30 in Dallas, where the highway officially ends.

I-45 Ranks Among the Most Dangerous Roads in TX

Some of the most common causes of accidents along I-45 include:

I-45 Expansion Project and Construction Accidents 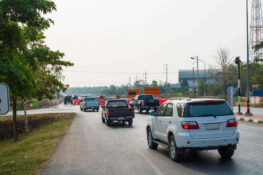 TxDOT has plans to widen I-45 and make other updates to increase safety and mobility. The planned expansion of I-45 would stretch from Downtown Houston to Beltway 8 North.

Known as the North Houston Highway Improvement Project, the planned expansion includes widening the interstate with the addition of four managed express lanes and rerouting the interstate to be parallel with Interstate 10 north of downtown. Many of the main lanes and frontage roads running alongside I-45 would be reconstructed as part of the project.

Some in the community believe that widening the highway would not solve Houston’s traffic problems. Indeed, there is evidence to suggest that expanding highways does not reduce congestion. Many Houston residents have emphasized the need for more public transportation rather than more roadways.

However, the expansion project appears to be tentatively moving forward. The Texas Transportation Commission voted unanimously in 2021 to continue the project.

While construction work is underway, I-45 is sure to be even more dangerous than it currently is. Houston residents may be used to road construction, but these zones can present numerous hazards to drivers.

According to the National Work Zone Safety Information Clearinghouse and National Highway Traffic Safety Administration (NHTSA) data, most of the fatalities that occur in work zone car accidents are drivers and passengers.

Tragically, more than 3,300 people were killed in road construction zones across the United States in a recent five-year period. Road construction zone accidents are a constant hazard. Motorists using I-45 in the coming months and years will need to exercise caution.

Major Accidents on I-45

I-45 has been the site of many major accidents. Below are some of the accidents that recently occurred on this highway:

If you have been injured in an accident on I-45 or elsewhere in southeast Texas, then you may be entitled to seek compensation for your medical expenses, lost wages, vehicle damage, pain and suffering, and more.

A seasoned I-45 accident attorney at Herrman & Herrman can help you understand your options and pursue an injury claim against the at-fault driver. In multi-vehicle accidents on I-45, more than one insurance company may have financial liability for your injuries. You need a determined I-45 crash lawyer to stand up for your rights.

Learn how our law firm can help you if your life has been disrupted by a serious accident. Don’t settle for less than full compensation.

Contact us today at (361) 882-4357 for a free, no-risk consultation to find out how our team can help you with your car accident case.