Home Blog Personal Injury What Is The Law Surrounding Pedestrians in Texas?

What Is The Law Surrounding Pedestrians in Texas?

Posted by Kristopher Rodriguez on April 12, 2017 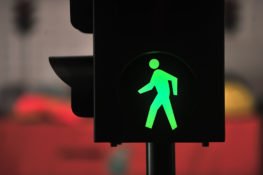 There are many legalities that prove to be complex and confusing, especially when they are state-specific. Because the United States is orchestrated in such a way that the federal, state, and local governments have the power to influence legislature, it can often feel overwhelming for the average citizen. How does one keep up with all of the laws that impact their existence? One of the most controversial and debated topics of legality in the country is the concept of transportation as it applies to pedestrians. The rule of thumb many have simply adopted out of necessity is to assume that pedestrians have the right of way, but each state may have different regulations. In the state of Texas, a citizen need only look to the Texas Transportation Code Chapter 552 on Pedestrians.

Pedestrians are legally required to adhere to the traffic signals unless they have a specially designated signal. If the light is yellow or red, pedestrians are not legally allowed to cross the road.

If the light is green, the pedestrian has the right of way, especially if there is a WALK signal. Oncoming traffic must yield to the pedestrian.

Pedestrians are not legally permitted to cross the road without a green light or a WALK signal. If there is a WAIT signal or a DON’T WALK signal, then the pedestrian has to remain stationary.

Vehicles are not allowed to pass other cars when they are stopped at a crosswalk.

Pedestrians are required to stay on the right side of the crosswalk.

If crossing at a point that is not a designated crosswalk, then the pedestrian does not have the right of way and must yield to oncoming traffic. Pedestrians are not allowed to walk along roadways when there is a provided sidewalk, and they must stay on the left side of the road facing oncoming traffic if there is no sidewalk provided.

If you been injured due to the negligence of another, contact the Herrman & Herrman personal injury law office. Call 361-882-4357 to schedule your free consultation today!