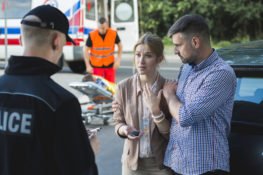 One of the most important things you can do after an auto accident is to file a police report.  When the accident happens, with the adrenaline and rush of emotions, you may not be able to think of everything so it really is best to contact the police department so they can document the accident.

Do I Really Need to File a Police Report?

Initially, you may not think your vehicle is really damaged or you are that hurt, which may change later on, so having that report will really help as the officer will take down all the important information, including who he believes is at fault. If you are injured, you should call 911 and ask for an ambulance. At the scene, officers will want to know the facts of the accident, check on injuries and get insurance information, etc. With all that is happening, having that police report to fall back on if you forget something or run into a problem in the future will go a long way.

Now, if it’s a large accident where traffic is stalled or just it’s obviously a bad accident usually the police will have already been called and a report filed without even having to ask.

However, if it is a relatively minor accident and either you don’t have the time, or the police can’t get there to the scene, or you just don’t think about it at the time, you can always go to the police department later on and file the report. This will keep an official record of the accident and have documented the other driver’s contact and insurance information. If it all possible though it is best to report it right then and there to get all the details of the accident on file while they are fresh in your memory.

So How Does A Police Report Help?

The police report can help you establish your claim or case later as it is used as proof or evidence of that it actually occurred and how it did. This may protect you in the event someone might lie about how the accident happened or that it even happened. Also, to prevent the dreaded he said she said from occurring which can delay your claim or case and affect a potential settlement.

Being in an auto accident is one of the most frustrating and unexpected things that can happen on the road, and even if it is a relatively minor wreck, call the police department and file that police report as soon as possible. Trust me, in the long run, you will be glad you did.