Home Blog Negligence Claims I know You Were Hurt At Work, But That Was Not Your Job!

I know You Were Hurt At Work, But That Was Not Your Job!

Posted by Kristopher Rodriguez on April 19, 2017 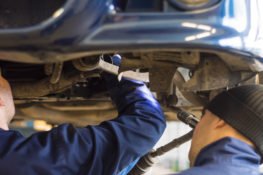 At the time of his accident, Sergio Fraire had been employed by Budget Rent-A-Car of El Paso, Inc. for over 15 years. During his first three years, he worked as a mechanic. Most recently his position was as a service manager, which made Fraire responsible for supervising mechanics, but not performing any mechanical duties. On the day that Fraire was injured, several of Budget’s trucks needed to be repaired and the mechanic was absent. Fraire’s supervisor indicated to Fraire that the trucks that had problems “needed to get out.” Feeling under pressure, Fraire decided to fix them himself. Fraire tried to fix a broken door on one of the trucks, but in the process, Fraire fell and sustained serious injuries.

Fraire filed a personal injury lawsuit against Budget claiming that Budget was negligent in failing to warn him or instruct him on the dangers involved with repairing the truck, given that mechanical repair was outside the scope of his job duties. Budget countered by arguing that it owed no duty to Fraire because truck repair was not part of Fraire’s responsibilities.

Employer to Duty to Warn

The message to be taken from Fraire’s accident is that it would not be prudent for employees to take the initiative and perform duties outside of their assigned duties as the employer may avoid liability should an injury result. However, the result might have been different if the employer was a subscriber to Texas’ workers’ compensation insurance program. Typically, an employee is eligible for workers’ compensation benefits as long as the accident was work-related. Defenses such as contributory negligence or assumption of risk are not available to the employer.

Although legally sound, do you think that the result of the Fraire case is fair? After all, Fraire was acting to benefit his employer after his supervisor exerted pressure on him by stating that the trucks “needed to get out.”