Determining Fault In A Car Accident 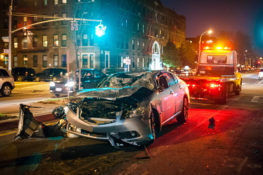 Road accidents happen all the time, but when they happen to you, they can cause some legal complications. It’s quite distressing that even though you are quite the careful driver, other drivers sharing the road with you might not be so, this is why there are laws that are put in place to protect you and save you from paying the cost of another person’s negligence.

Another angle to this as you know is; state laws require each vehicle on the road to be properly insured when a car accident happens a claim is filed and so the insurance companies of both parties investigate the claim by hiring the service of an adjuster whose job is to investigate the claim to determine which party was negligent. However, it will help you prove your case if you knew what to do or how to determine and prove you were not at fault.

Get A Police Report

When accidents auto accidents happen sometimes a member of your state’s police department (specifically someone from the traffic department) will show up at the scene of the accident to investigate who was negligent and write a report, and in some cases even issue a citation to the driver deemed to have been at fault. This police report can be very detailed by reporting the party who violated traffic laws, and the violations that led to the incident, but sometimes, the report could be less so and just state what had happened and the negligent behavior that had caused the accident.

However, in an event when there are no law enforcement agents at the scene, you should visit a police station close by and invite the other driver to join you because you must obtain a police report as insurance companies might not be obliged to look into the claim if a police report isn’t provided. Getting a police report is probably the best way to help determine fault and help your case.

If you are in an accident involving a rear-end collision or left turns then these types of accidents are easier to prove who is at fault.

Rear-End collisions are accidents that involve a car hitting another from behind, in this situation the law is on your side if you are the driver in front because the driver behind is required to be observant and careful not to drive to close to the bumper of the car in front.

This case is easy to prove because the damages are the best evidence to prove who was at fault but if the driver in front stops suddenly, or has bad brake lights then the driver behind isn’t liable for damages.

In a left turn situation, the car going straight, the driver turning left is deemed to be at fault because the former has the right-of-way and the later should yield. This rule has exceptions too especially is the car going forward is moving over the speed limit or went through a red light.

Having all these in mind you should have a much easier time proving that you are not liable and getting compensations. It also helps to research your state traffic laws, as a decent knowledge of some of these laws can help improve your chances of winning the case and getting your claims. Always be super careful and observant when driving though, do the driving for everyone sharing the road because it is better to avoid accidents if you can.