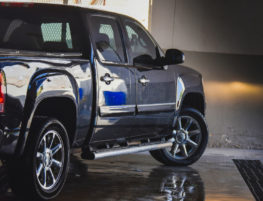 Texans love pickup trucks. And truck lovers in Brownsville and elsewhere in the Lone Star State are even rewarded for their devotion to trucks with Texas-edition special model pickups. Some say that 1 in 5 pickup trucks sold in the U.S. are sold to Texans.


Trucks are great for hauling stuff, whether around a ranch or in town in Brownsville. Some workers rely on their pickups to help do their jobs. The size of pickups leads some people to believe that they are safer in a collision than a passenger car.

Unfortunately, the added safety afforded by pickup trucks is a myth as big as Texas. The Insurance Institute for Highway Safety (IIHS) – the crash test guys – said in their 2019 testing that passengers in modern pickup trucks are at higher risk of injury or death than drivers in car accidents.

“A majority of two-row pickups struggled to maintain their structure in a recent round of crash tests designed to gauge what happens when the front-right corner of the vehicle smashes into something,” a USA Today report said.

“‘Clearly as a class, they’re not offering state-of-the-art occupant protection on the passenger side”, IIHS chief research officer David Zuby said in an interview.

The IIHS says in its report that it took pickups more years and models to start performing well in driver-side crash tests than other types of vehicles needed, so it is not surprising that pickups are lagging a bit in the newer passenger-side safety tests.

The IIHS released its latest pickup truck crash test results in 2019. It rated the performances of 11 crew cab pickups — four small and seven large – in the passenger-side small overlap test. A small overlap crash occurs when just the front corner of the vehicle strikes another vehicle or an object such as a tree or utility pole, the IIHS says.

The Ford F-150 was the best performer in the IIHS passenger-side test. “The structure held up well…. The seat belts and airbags worked well together to control the movement of the passenger and driver dummies, and neither dummy recorded any potential injuries.”

The Toyota Tundra, a large pickup, earned the only poor rating, while five of the trucks rated marginal.

“The Tundra … was seriously compromised by intruding structure,” the IIHS said. “The passenger dummy’s head hit the grab handle attached to the A-pillar as the A-pillar intruded into the passenger’s space.

The Honda Ridgeline earned an acceptable rating in the passenger-side test but qualified for the 2019 TOP SAFETY PICK award because of good-rated headlights available in more expensive trim packages and available superior-rated front crash prevention. The Ridgeline qualifies for the award only when equipped with those features.

You can search all IIHS vehicle ratings here, but the IIHS isn’t the only product safety organization that tests pickup trucks. Each year, the National Highway Traffic Safety Administration (NHTSA) crash tests vehicles as part of its 5-Star Safety Ratings program.

NHTSA ratings are searchable here by make model and year. For example, the NHTSA gives various models of the Ford F-150 pickup since 2011 five stars overall and for frontal and side crash testing. The F-150 gets four stars in rollover crash testing.

Consumer Reports provides a searchable guide to pickups based on IIHS and NHTSA safety ratings as well as its own scores for reliability, owner satisfaction, mileage, handling, braking, overall road test and more.

Are Trucks Safer than SUVs and Cars?

As the IIHS safety ratings indicate, motor vehicle safety is based on more than size. In 2002, in fact, researchers from the Lawrence Berkeley National Lab (Berkeley Lab) and the University of Michigan conducted a unique risk analysis study which showed that, contrary to conventional wisdom, vehicle quality is a much more important safety factor than weight when it comes to the safety of drivers involved in a crash.

The researchers determined that “SUVs are no safer for their drivers than the average midsize or large car and not much safer than many of the most popular compact and subcompact car models. Drivers of pickup trucks are at even greater risk than drivers of SUVs. When the combined risk is considered, SUVs and pickup trucks are revealed to be significantly more dangerous than just about any car.”

A review of IIHS data by the Driving blog led the author to conclude that advancements in safety technology mean that the age-old idea that bigger is better doesn’t apply to motor vehicles like it used to. “Because collisions pose less of a threat now compared with rollovers and other calamities, pickups and large sedans are no longer the safest vehicles to be had.”

According to Driving, “SUVs, which combine the superior handling characteristics of a passenger car with the mass of a pickup, are the safest vehicles of all, with half the overall occupant deaths per million vehicles registered, compared with pickups and cars.”

Because opinions differ and vehicle models change to some extent each year, the cautionary adage, “Let the buyer beware,” still applies. We suggest that you research IIHS, NHTSA, Consumer Reports and other sources as you consider any vehicle purchase in Texas.

How Our Brownsville Pickup Truck Accident Lawyers Can Help

Vehicle safety refers to how well a pickup truck’s structure will protect drivers and passengers in a Brownsville pickup crash. Most automobile and small truck accidents are caused by driver error.

If you have been injured in a Brownsville pickup truck crash that was another driver’s fault, even if it was the driver of the truck you were in, you may be able to recover compensation for your medical bills and other losses. The Brownsville car accident attorneys of Herrman & Herrman, P.L.L.C. can review your pickup truck accident and discuss your legal options during a free, no-obligation initial consultation. Contact us for free today.