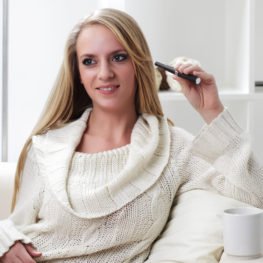 In March 2013, Jennifer Ries and her and husband, Xavier, became victims of a defective product. While on their way to the airport, Jennifer decided to charge a VapCigs e-cigarette. A strange aroma filled the car and Jennifer noticed that the e-cigarette battery was dripping. When she attempted to remove the battery from the charger the battery started to shoot flames directly at her. The battery exploded, sending metal fragments flying. As a result, Jennifer suffered second-degree burns.

Electronic cigarettes, commonly referred to as “e-cigarettes”, have become tremendously popular over the last few years as they are marketed as a more healthy alternative to traditional cigarettes. Currently, e-cigarettes are used by over 2 million people in the U.S. E-cigarettes are designed with a battery-powered device that produces a vapor that resembles smoke and contains a mixture of nicotine and other flavorings, thus providing an experience that mimics smoking traditional cigarettes.

While initially denying that e-cigarettes are unsafe, e-cigarette industry leaders such as Thomas Kiklas of the Tobacco Vapor Electronic Cigarette Association now acknowledges that there are occasional failures. While the number of reported e-cigarette explosions has been minimal compared to the amount of e-cigarette usage, those who are injured by such explosions are seeking to hold the manufacturers responsible. Under product liability theory, the manufacturer of a product may be liable for injuries suffered by product users if the product has a flawed design or if the product was manufactured incorrectly.

Furthermore, manufacturers must warn the public of known risks associated with the use of the product and provide adequate instructions regarding the product’s proper use. This means that if a product is dangerous in some way that is not likely immediately obvious to a consumer, the manufacturer has a legal obligation to warn about this danger. In the case of e-cigarettes, arguably manufacturers should warn consumers of the potential for battery explosions if charged using other than specified charging devices.

To date, there has been a relatively small number of reported cases of e-cigarette battery explosions. Such explosions can be minimized or eliminated by proper warnings or instructions. If the exploding battery problem is a problem that is relatively easy to address, should the FDA now focus on determining the health risks that e-cigarettes pose based on the chemicals used in e-cigarettes particularly since many consumers consider them as a safe alternative to traditional cigarettes?