Causes of Aircraft Crashes in Brownsville 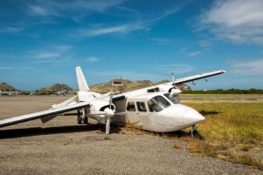 Travel by air in the U.S. is generally safe considering how few accidents there are compared to the tens of thousands of airplanes that fly every day. However, when something does go wrong, the risk of injury and death is obvious. While commercial airline disasters are national news, numerous general aviation accidents at small airports in Texas and elsewhere across the U.S. leave people seriously injured or grieving the loss of loved ones.

The fatal crash of a hobbyist’s small plane at the Port Isabel-Cameron County Airport near Brownsville in December reminds us how the pursuit of an avocation can turn tragic. As with other aircraft crashes, a team of specialists from the National Transportation Safety Board (NTSB) will investigate the crash and determine the cause.

When an airplane accident has been caused by negligence, the carrier or individual owners of the aircraft or third-party service providers may be held liable for individuals’ injuries and for losses suffered by the family of the deceased. The personal injury attorneys of Herrman & Herrman pursue aviation accident claims on behalf of clients in Brownsville and across South Texas. If you or a loved one has been hurt in a plane accident that someone else caused, contact us to set up a free legal consultation about your rights to compensation.

Causes of Aircraft Accidents in Brownsville

While most of us are more familiar with commercial airlines, most local airport activity in towns like Brownsville revolves around general aviation, which refers to civil aircraft operations other than commercial air transport or aerial work operations. The United States has the largest and most diverse general aviation community in the world, with more than 220,000 active aircraft, including amateur-built aircraft.

In 2018, the most recent year for which statistics are available, the NTSB says there were 231 fatal aviation accidents, of which 224 were in general aviation, seven involved commuter and on-demand carriers and one involved air carriers.

According to the Federal Aviation Administration (FAA), inflight loss of control – mainly stalls – accounts for the largest number of fatal accidents. Other leading causes of fatal general aviation accidents include:

Many general aviation accidents are ultimately recorded as cause unknown.

But there are people behind each of these causes of aircraft accidents. NTSB investigations show that more than 88 percent of all chartered plane crashes can be attributed, at least in part, to pilot error. This is typically a pilot’s loss of control of the aircraft.

Crashes can occur cause because of the same types of negligence as committed by drivers of cars and trucks, such as:

In other cases, an investigation may determine an accident was caused by:

The outcome of the Brownsville aircraft crash will center on the results of the National Transportation Safety Board (NTSB) investigation. NTSB findings, published as preliminary and final reports, are public information, so all those affected by the crash will have access to them.

In crashes in which negligence is found to be a contributing factor, those who have been injured may seek compensation for:

In large aviation disasters, the airline and/or other corporations involved are well-insured and may have funds set up soon after an accident in anticipation of having to settle multiple claims.

In smaller cases, a general aviation company that employs the pilot and/or crew, the aircraft owner, a third-party vendor or the local government that operates the airport may be held liable. The company’s business liability insurance may be compelled to pay claims filed by the injured in cases of negligence on the part of the company or its employee.

To ensure proper payment of your claim, you need to ensure you are demanding all that you are due. With the help of an experienced personal injury attorney at Herrman & Herrman in Brownsville, you can be sure that all of your losses are considered and included in your claim. We can ensure that your claim is submitted in a timely manner with all filing requirements and deadlines met, while you focus on recovering from your injuries.

The personal injury attorneys of Herrman & Herrman, P.L.L.C. can help you obtain justice if you or a loved one has been injured in an aviation accident in the Brownsville, Texas, area. We have stood up for the rights of thousands of clients who have been seriously injured through no fault of their own and have a track record of success.

The aviation accident lawyers at Herrman & Herrman in Brownsville have the knowledge, experience and resources necessary to investigate and document how an aviation accident occurred and to pursue compensation that ensures your financial recovery. Contact us today at (361) 882-4357 or fill out our online contact form to schedule a free legal consultation about initiating your claim.