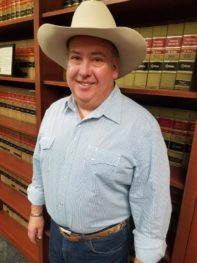 To this day, Corpus Christi resident José Farias Jr. is reminded of the traumatic truck accident he experienced one late afternoon in July 2019, every time he approaches an intersection.

José, 56, had finished work for the day at LyondellBasell, where he works as a shift supervisor and was on his way home in his newly purchased 2018 Chevy Silverado. Stopped at the intersection on Ave F and 2700 in Corpus Christi, José was suddenly rear-ended by a 2015 Ford F-150.

The impact was so great that it spun José’s vehicle into oncoming traffic. That traffic was an 18-wheeler truck that was fully loaded with grain.

“The driver rear-ended me and spun my vehicle into oncoming traffic,” said José. “The fully loaded 18-wheeler grain truck had no chance to avoid colliding into my newly purchased truck.”

José was taken to the ER and treated for neck, back, and right bicep injuries.

“Pain radiated down my right shoulder to the bicep,” said José. “It all hurt so bad, but I am still thankful that I wasn’t hurt worse.

“I had physical therapy, which helped, but it was a very painful process.”

To this day, the horrific accident has scarred José.

Paranoid About Every Intersection

“I now find myself more paranoid of every intersection I come to,” said José, “thinking that someone is going to run the stop sign again.”

Left with a totaled truck, mounting medical bills, and requiring time off of work due to his injuries, the unexpected predicament José found himself in was stressful, to say the least. 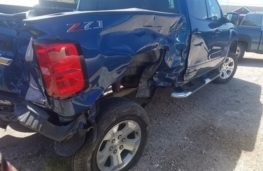 The side of José’s totaled 2018 Chevy Silverado where the 18-wheeler hit him.

Fortunately for José, because he was the victim in this accident, the other driver’s insurance would be able to take care of his medical bills and the cost of replacing his totaled truck, right?

“They would not confirm whether or not the driver that hit him was even covered,” said Herrman and Herrman case manager, Connie Polk.

“Mr. Farias came to us when he got a bad feeling about the at-fault driver’s ‘insurance’,” explained Connie. “They wanted José to answer all of their questions, like wanting to know where he worked, how much money he made, and so on.

“It seemed that the insurance company wanted José to answer all of their questions while providing him with no answers in return.

The rear-ed of José’s truck where he was initially hit.

“He quickly realized he was ‘out of his league’ and wisely hung up with them and called our firm immediately.”

Other Driver Was Uninsured

José was smart to bail on the so-called insurance of the other driver. While the at-fault driver did give insurance information to the police at the scene of the accident, that information turned out to be false.

“My main concern was that I had no recourse but to absorb the entire incident be-cause of the dishonesty of someone else,” said José.

“I missed several days of work,” said José, “and had to leave work early for physical therapy.”

“The bills mounted quickly and with the at-fault driver not responsible enough to have insurance, the burden would all fall on me, not to mention my credit rating if I would’ve been paying late on my bills.”

Part of the mounting bills included a replacement truck that José had to purchase because his last truck was totaled.

“I had to purchase a replacement truck out of my own pocket,” said José, “which increased my payments by $125. All of this was definitely not planned.”

José knew he needed help. But he was not too thrilled by the idea of hiring a law firm either.

For decades, a few greedy, dishonest personal injury attorneys have given lawyers a bad reputation.

“Honestly, I had heard all the horror stories from others about law firms and lawyers,” José admitted. Considering that José has also worked with both Nueces and Kleberg County Sheriff’s Departments for the last 32 years, it might explain his skepticism of the legal profession.

“Working with Herrman and Herrman and my case manager, Connie, has shown me a different side to the reputation that has been otherwise smeared.”

At first, José wasn’t shy about sharing his distrust of law firms with Connie.

“When we first spoke,” said Connie, ”he made it clear that he was very skeptical of lawyers and that he had heard many horror stories.

“I made it my mission to get Mr. Farias the help he deserved and to help show him that law firms like ours are truly here to help the public when they’ve been injured and have nowhere to turn.

“Fighting the massive insurance companies on your own puts you at a huge disadvantage. We’re here to help even the playing field for the victims.”

“On The Case Quickly, Results Within Hours”

“From the moment I first contacted the firm, they were on the case quickly,” said José.

Going beyond the standard services a law firm may typically provide, Herrman and Herrman even helped relieve José’s transportation problems.

“They were able to negotiate reliable transportation for me and kept me on the road and mobile while my vehicle was being evaluated,” said José.

Given the circumstances of the at-fault driver’s lack of insurance and Mr. Farias’s mounting bills, the firm knew they needed to get right to work.

“When we discovered the at-fault driver had no insurance,” said Connie, “we knew we had to move fast to help give Mr. Farias some relief.

“We put his insurance company on notice immediately that there was no coverage for the liable party.”

Moving fast was crucial to helping José keep his head above water from his growing debt.

“Along with his mounting medical bills, time off of work to recover and get treatment, and needing a new vehicle since his was totaled, he was also incurring storage fees on his totaled truck.

“We got his insurance company to get to work fast on his property damage and streamline the settlement.

“In Mr. Farias’s case, we knew how much stress was being caused by the mounting bills he was having to cover out of pocket, so I wanted to make sure he was relieved ASAP.”

Helping clients have hope, stay positive, and see a light at the end of their di-lemma is a top priority for Herrman and Herrman. One part of ensuring that happens is having a team available to address the concerns of clients.

“Open, honest and regular communication with our clients is a key tenet in my firm,” said Gregory Herrman, the managing partner at Herrman and Herrman.

“The people we’re helping are usually going through one of the most difficult events in their life. One way we can make that less stressful for our clients is to communicate regularly and honestly.”

Throughout the case, José was reassured that there would be a light at the end of the tunnel and would be able to get his life back to normal.

“Gave Me Hope I Would Be Made Whole Again”

“Herrman and Herrman, particularly my case manager, Connie, addressed all of my concerns and gave me hope that I would be made whole again, both physically and financially,” said José.

“Connie was always very honest and willing to talk about my concerns.”

José couldn’t be happier with the outcome of his case.

“I absolutely feel relief to be able to pay my medical bills,” said José.

“Working with the firm was much easier than I had hoped for.”

From Skeptic To Big Fan

Not only was José able to get a settlement that allowed him to be whole again, but he has also transformed from being a law firm skeptic, into a big fan of Herrman and Herrman.

“It’s great to work with a law firm that’s not only known for its integrity but also known for being involved and vested in my community,” said José.

“They kept me informed and up to date throughout my case. They always responded promptly and were friendly.

“Having an actual person and voice to answer my questions is a huge plus when dealing with a situation that I do not have the expertise in – such as Connie and the Herrman and Herrman firm.”

“Don’t Take On Battles You Don’t Understand. Leave It To The Pros.”

“I feel like I have a friend with Connie and feel like I could contact her or anyone at the firm to give me the right direction in the event that I need representation.

”I will also no doubt convey my great experience with my friends and colleagues!” said José. “I would tell them not to take on battles you don’t understand.

“Things such as legal matters are best handled by the professionals at Herrman and Herrman.

“If you don’t seek their help, the experience may be full of injustice or even worse, may cost you more in the long run.

“Let Herrman and Herrman be your spokesperson in the world of legal matters and justice.”

Connie’s mission of helping José while also changing his perception of law firms was also a great success.

“I’m so happy that we were able to make a believer out of José!” exclaimed Connie.

“I started this firm to help the underdogs win their fights against big corporations and insurance companies,” said Gregory Herrman.

“But, it’s clients like Mr. Farias, ones that are skeptical and have lost hope that there is anyone that is on their side, and showing them that my team and I are truly here to fight for them – we love making them into believers.”