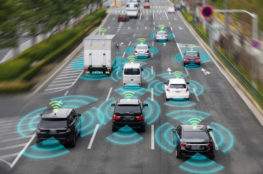 A Corpus Christi college’s role in the development of autonomous vehicles has come to an abrupt stop after federal regulators suspended testing of self-driving vehicles following an unexplained accident at one campus.

You may have missed test runs of The Surge, a self-driving shuttle bus running routes on the campus of Texas A&M-Corpus Christi. The use of the shuttle bus was suspended a month after it began, pending the outcome of a federal investigation of safety issues with the vehicles following an accident in Columbus, Ohio, according to the Corpus Christi Regional Transportation Authority (CCRTA). There have been no reported incidents with the bus here in Corpus Christi.

The self-driving vehicles, manufactured by EasyMile, were being tested at 16 locations throughout the U.S. including Corpus Christi, Dallas, and Houston. In Columbus, Ohio, a self-driving shuttle unexpectedly stopped in the middle of a route at midday in February, and a woman fell from her seat onto the floor, according to the Columbus Dispatch. The woman suffered “minor injuries.”

EasyMile, the autonomous driving technology manufacturer, said that road tests of its self-driving vehicles had been temporarily suspended by the National Highway Traffic Safety Administration (NHTSA) after a passenger fell from their seat during a low-speed emergency stop.

A Washington Post report says a video from an onboard camera shows the sudden stop was enough to throw the shuttle’s safety operator off his feet and across the inside of the shuttle and knock the passenger from her seat.

The NHTSA said that the agency has suspended passenger operations for 16 EasyMile autonomous vehicles, pending an examination of safety issues with the vehicles.

Are Autonomous Vehicles Part of Our Driving Future?

NHTSA, like others, expects autonomous vehicles to be a routine part of the traffic in the future. “Fully automated cars and trucks that drive us, instead of us driving them, will become a reality. These self-driving vehicles ultimately will integrate onto U.S. roadways … in the coming years,” the federal agency says.

The artificial intelligence researchers and consultants Emerj said in March that most car manufacturers think self-driving cars are inevitable, and they’re investing billions of dollars in autonomous vehicle initiatives.

But we’re not there yet.

Technology experts and car manufacturers are promising either cars that can operate autonomously for a large part of a person’s highway commute (Level 3) or cars that can almost drive themselves in a specified metropolitan area (Level 4), Emerj says. At either level, a human must remain ready to assume control of the vehicle.

After reviewing what 10 U.S. automakers are doing to develop self-driving vehicles, Emerj concludes that manufacturers are walking back predictions for having autonomous vehicles available and on the road by the early 2020s.

How Safe Are Autonomous Vehicles?

Even in test mode, self-driving cars have already been involved in the deaths of five people since 2016.

The most well-known autonomous vehicle fatality is the death of Elaine Herzberg in 2018. The 49-year-old woman was walking her bicycle across the road in Tempe, Arizona, when an Uber autonomous vehicle doing about 40 mph struck and killed her.

As the Verge reported, the investigation into that accident blamed the autonomous vehicle’s backup driver, who was watching TV on her phone at the time of the crash. The vehicle’s Level 3 system detected Herzberg 5.6 seconds before the car hit her, but it never identified her as a human being on the road, nor did it accurately predict her path.

A study released in June by the Insurance Institute of Highway Safety predicts that autonomous vehicles may one day eliminate about a third of car crashes.

While driver error is the final failure in more than 9 out of 10 crashes, only about a third of those crashes are the result of mistakes that automated vehicles would be expected to avoid, the IIHS says.

Planning and judgment errors, such as speeding and illegal maneuvers, contribute to about 40 percent of car accidents. The fact that a driver’s deliberate decisions can lead to crashes indicates that rider preferences might sometimes conflict with the safety priorities programmed into autonomous vehicles.

For self-driving vehicles to live up to their promise of eliminating most crashes, they will have to be designed to focus on safety rather than rider preferences for speed and convenience, although those two aims are at odds.

“Building self-driving cars that drive as well as people do is a big challenge in itself,” IIHS Research Scientist Alexandra Mueller, lead author of the study, said. “But they’d actually need to be better than that to deliver on the promises we’ve all heard.”

Self-driving vehicles are being used only in a limited capacity so far. Eventually, they will be a regular part of highway traffic, if the NHTSA prediction is accurate. It is safe to predict that self-driving or driverless vehicle accidents and injuries will follow.

As motor vehicle technology changes, accidents caused by defective automation or human error will pose liability questions that the legal system will have to resolve. In Corpus Christi, the car accident attorneys of Herrman & Herrman will continue to work to protect the rights of people in Corpus Christi and throughout South Texas who are unjustly injured by the negligence of others.

Contact a Corpus Christi car accident attorney at Herrman & Herrman at (361) 882-4357 if you have been injured in a car accident that may have been caused by another driver’s or car manufacturer’s negligence. We’ll work to resolve your case as quickly as possible and seek to maximize the compensation you receive.