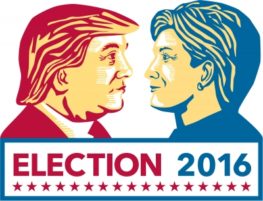 Many people often assume that lawyers would naturally be among the most litigious people in the world. After all, if they earn their living dealing with issues of law then it just makes sense that they would want to file or defend against as many lawsuits as possible, right? Wrong! For the vast majority of lawyers, lawsuits are a measure of last resort – and option that is only utilized when all other attempts at protecting a client’s interests have failed. For some people, however, legal issues and lawsuits seem to be a normal part of everyday life. Take, for example, the two major party candidates for President of the United States.

Anyone who has followed the Clintons for the last several decades should already be familiar with the couple’s intimate relationship with legal complications. Since they burst onto the national political scene in the early 1990s, both Bill and Hillary Clinton have been at the center of one legal controversy after another. There have been civil cases involving everything from sexual harassment to accusations that the Clinton Foundation is nothing short of a racketeering scheme. For many Americans, it is just a given that anything involving either of the Clintons carries with it a potential for controversy, scandal, and possible legal complications. And with Mrs. Clinton carrying the banner for the Democratic Party in the 2016 election cycle, it was easy to foresee that those types of negative issues would surround her once again.

What many did not foresee, however, was that her opponent would not only have similar legal controversies but would actually compete with and surpass her in the realm of legal controversy. Donald J. Trump, the Republican Party candidate for President of the United States is – to put it mildly – no stranger to lawsuits and controversies himself. According to some early estimates, if he were to be elected to the nation’s highest office, he would be the most litigious individual to have ever captured the presidency.

Of course, there is nothing wrong with filing a suit to protect your interests when there are no other viable options. In Mr. Trump’s case, however, litigation seems to be part of his “Art of the Deal.” As Reuters reported, Trump has made a habit of forcing contractors and others to sue him to obtain payment from his companies. Trump and his defenders routinely suggest that this is a sign of good business acumen. For contractors who did their work and expected a self-described billionaire to actually pay what he agreed to pay, however, being made to fight for what they were clearly owed was nothing short of bad faith.

Of course, those lawsuits were just a few of the many Trump has been involved with over the years. According to USA Today, Mr. Trump has been involved in more than 3,500 lawsuits in the last 30 years. To put that into perspective, that number averages out to roughly one new lawsuit filed every three or four days! About 1,900 of those saw him named as a plaintiff, with another 1,450 listing him as the defendant. He was also involved in another 150 suits where he was named as a third party, or that involved bankruptcy or other legal concerns.

Some of those suits involved serious concerns. With more than 3,500 lawsuits spanning three decades, that should be a given. Others seem almost amusing in hindsight – such as the case where he sued the Florida town of Palm Beach for $25 million, alleging that the city was attempting to stifle his exercise of the right to free speech. And why? On the surface, the suit was prompted by Trump’s refusal to abide by the city’s flagpole height ordinance of 42 feet (Trump erected one nearly twice that height). In reality, Trump was using that lawsuit to push another pet issue involving an ordinance that required large enterprises like his Mar-a-Lago club to demonstrate that they were “town serving.”

For Trump, it sometimes seems as though lawsuits are his first recourse. During the Republican primaries this year, he actually threatened to sue Texas Senator Ted Cruz, alleging that his rival was not eligible to run for the presidency due to the Constitution’s requirement that the President must be a “natural born” citizen. In another example of his reliance on the courts, he basically forced a group of four dozen temp workers to sue him last year after one of his companies refused to pay them overtime earning to which they were entitled. Yes, that’s right: A Trump enterprise tried to avoid paying waiters, kitchen staff, and even busboys money they were owed.

It might be nice to assume that those types of lawsuit-related issues are behind him, especially now that he is in the running to possibly add the White House to his list of real estate conquests. That’s not the case, though. Even now, he has a number of lawsuits pending – some involving various government entities at the local and state level, and many other civil suits that await trial or other disposition. If he were to win the presidency, the nation could be witness to something relatively unique: the spectacle of a sitting President engaged in ongoing legal disputes with the nation’s citizens.

Trump’s familiarity with litigation can be frightening at times – as it was in February of 2016 when the candidate suggested that he would move to loosen libel laws as President so that he could sue reporters who wrote negative things about him and “win lots of money.” And then there is the ongoing saga of the Trump University fraud case, in which he is accused of operating a scam school that defrauded its students. The trial, in that case, has been scheduled to begin in late November – weeks after the nation has selected the next President.

Mrs. Clinton has been named in about 900 or more lawsuits herself, so this is all just a matter of degree at this point. Whichever of them wins the election this year, one thing is for certain: the nation’s next President will be intimately familiar with lawsuits.

Of course, when you or a loved one have been injured or otherwise wronged in any way, you should ensure that your interests are protected by consulting a competent Texas personal injury attorney. We may not be running for President this year, but that doesn’t stop us from working every day to ensure that your rights and interests receive the protection you deserve.