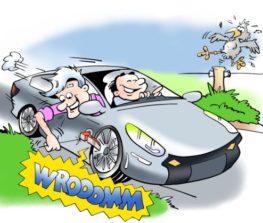 After working over 30 years to make vehicles quiet, auto manufacturers are now required that all hybrid and electric cars make some kind of noise when traveling at low speeds. Cyclists, pedestrians and those are blind will benefit as they will hear the vehicles coming. The Pedestrian Safety Enhancement Act of 2010 established a Federal Motor Vehicle Safety Standard to significantly reduce the number of pedestrian injuries.

According to the National Highway Traffic Safety Administration, 66,000 people were injured in 2013 and a total of 4,375 were fatalities. The Obama Administration believes it could help prevent about 2,400 pedestrian injuries in a year based off of the report by the NHTSA. Although it might cost the auto industry almost $39 million annually, the benefits will reduce injuries 19% saving almost $250 million – $320 million, according to the U.S. National Highway Transportation Department.

The ruling mandated that major automakers like Tesla Motors Inc, Nissan Motor Co and Toyota Motor Corp to add sounds to all vehicles traveling at speeds below 19mph. Manufacturers have until September 1, 2019 to equip all hybrids and electric cars with sounds that meet new federal safety standards.

“If the vehicle doesn’t make any sound, they can kill.”

Don Norman, a cognitive science professor turned vice president for Apple and author of over 20 books, was able to shed some light on the new regulation. He expresses how car lovers love the silence of electric vehicles, pedestrians have mixed feelings, but blind people are generally concerned. As they very well should be. Most blind people cross streets in traffic relying upon the sounds of vehicles. That is how they know when it is safe to cross.

Adding sounds is not a new idea. Think about the beeping sounds a commercial truck or construction equipment make when in use or reversing. The fact that all vehicles require a horn so that drivers can use them to alert.

So what sound should they go with?

One group of blind people suggested adding rocks inside hubcaps. Rocks would make for a natural, continuous scraping at low speeds. The frequency of the drops would increase with the speed of the car until the rocks end up against the rim, silent. Most groups decided on manufacturers being able to differentiate sounds between companies while still adhering to guidelines. The NHTSA issued a set of principles along with a detailed list of requirements:

If you have been injured due to the negligence of another, please call the Herrman & Herrman law firm to speak with an experienced attorney. Call 361-792-2358 to schedule a free consultation today!