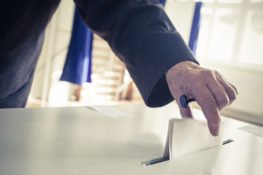 Given the vastness of Hidalgo County, it is usually very difficult to make it on time after work to your precinct’s polling location on Election Day. Combined with the shortage of staff, this program is a much needed overdue convenience that residents now have. Additional benefits provided by this include enhancing accountability, restoring the integrity of the election process and curbing the voter fraud and intimidation that we have seen over the years hit the news. Hidalgo County is the first in the region to adopt the countywide polling program.

On another noteworthy note, Hidalgo County Elections department recently purchased 1,294 new HART Verity Touch voting machines that will be put into use in November 2018’s general election. This will alleviate the need for assistance voting and avoid voters being turned away when trying to cast their ballot at the last minute as we have seen many times occur in elections. Their lightweight and compact designed machines will not only allow voters to adjust font size, screen contrast, and language but allow for write-in candidates and allow for changing of selections easily.

With voter turnout in Hidalgo County for the 2016 presidential election reaching a record 51.1 percent of registered voters, the hope is that the extended voting locations, hours and new machines will bring about a surge in voter participation for a bright future.