Home Blog Articles GERRYMANDERING. WHAT IS IT? HOW DOES IT AFFECT ME?

GERRYMANDERING. WHAT IS IT? HOW DOES IT AFFECT ME?

A topic that you may have heard of may have not, may understand a little, or none at all in politics – especially in Texas — is gerrymandering. What is gerrymandering? It is defined as to “manipulate the boundaries of (an electoral constituency a.k.a. district maps) so as to favor one party or class.” To get a better understanding of gerrymandering, you need to know what district maps are. Your home is in what is called a “district map”. These are determined & drawn at the state level of government by Texas Legislators based off of the results of the Census, which is done every 10 years. A district map is a division of territory within a state, county, city, and locality that determines who you have an opportunity to vote for and more. For example, if you are voting for a candidate for the United States Congress and live in Nueces County, you’ll be voting for a candidate to represent you the 27th Congressional District.  This person will represent you at the federal level of government in Washington D.C. The district map for the 27th Congressional District encompasses all of Nueces County (see image below), in addition to Victoria County, Bastrop County, over to Wharton County and more – this district map has previously been determined to be gerrymandered by federal courts. I’ll expand on this in a bit. 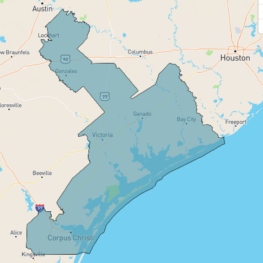 27th Congressional District of Texas (To represent you in the United States Congress in Washington D.C.)

Next, we have Texas House & Senate Districts which represent us at the state level of government in Austin. Nueces County currently has two House Districts (see example below) and one Senate District (all of Nueces down to parts of RGV). If you reside within either of these district maps, you will be voting for a candidate to represent you in state government in the Texas House of Representatives in Austin. District maps are also drawn for County Commissioner, City Council, School Board, and more depending on what city or state you reside in. 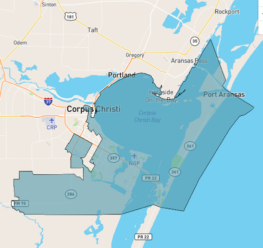 Back to gerrymandering and how it affects you as a citizen. Since these maps are drawn by State Legislators (Texas Representatives & Texas Senators to be approved by the Governor), the controlling political party is able to draw these district maps in a way that keeps them in political power by including more voters they know would vote for them. In Texas, the controlling party is the Republican Party. How do they gerrymander? Take the 27th Congressional District for example. When this district map was drawn, Republican legislators looked at demographics in our region and saw how voters voted and intentionally (with scalpel precision) drew district boundaries to include more voters based off of their race, income, and voting habits that would benefit the Republican Party (see example below). 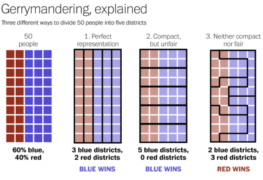 Why would Republicans do this? Because they want to maintain control and power. By doing so, this affects what constituents (people) want and need for their community because you will have a Representative that might not have the general population’s best interest at heart. They are able to pass legislation of their choice without any real opposition. In the 27th Congressional District, the needs of Nueces County are extremely different from the needs of Bastrop County up by Austin. The needs there are very different from the needs of Victoria. This map was drawn to include more counties that were predominately rural, conservative, and white to counter the majority Hispanic populations of Nueces and surrounding counties that would likely vote for a Democrat. Thus, cheating to win this seat. Gerrymandering is completely unfair, and district maps should be drawn with no political party interest in mind – it should be neutral.

In April of 2020, we will begin the process of the Census. As previously mentioned, the Census determines how many people live in a region, which is then part of the decision on how district maps are created. Each district map has to have a minimum number of people living in there to be drawn. The more people counted – the better representation we get in our government. When the Texas Legislature reconvenes in 2021 (they only meet on odd years) to pass laws for the State of Texas, they will also be deciding how district maps are drawn all across Texas, based off of the results of the 2020 Census. This affects U.S. Congressional Districts (for representation in Washington D.C.) and Texas House & Senate Districts (for representation in Austin). With the Republican Party in control of the Governorship, the Texas Senate, and Texas House (the 3 Chambers) – we can expect them to repeat their past actions of gerrymandering (cheating) Texas for another decade if they maintain control after the November 3, 2020 elections.

Currently, the Democratic Party is 9 seats short of being in the majority of the Texas House.  In the 2018 midterm elections, 12 Democratic candidates for the Texas House were able to overcome gerrymandering by getting new voters out to vote for them. If Democrats are able to oust 9 Republicans and protect the currents seats they hold in the 2020 elections, they will be able to prevent gerrymandering in Texas because they will be the majority ruling party for 1 of the 3 chambers. Remember, the Texas House & Texas Senate have to agree on how district maps are drawn. This will force Republicans in the Texas Senate and the Governor to compromise on how district maps are drawn rather than letting them do as they please with no recourse.

Starting in November 2020, there will be no more straight-ticket voting – meaning, you can’t vote DEMOCRATIC PARTY or REPUBLICAN PARTY as a straight ticket with a push of a button anymore in Texas. You have to individually go through each race and select your candidate of choice. It is important to complete your ballot to ensure the party or candidates you are rooting forget your vote. Please make sure your voter registration is up-to-date. We have so much as stake in 2020, and the only way we can affect change is if we all vote.