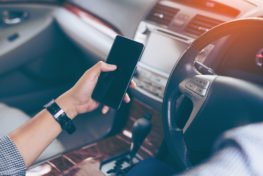 Recently, a teenager from California livestreamed a deadly car crash while allegedly driving under the influence on a California highway with two 14-year-old girls in the back seat. In the recording, the camera starts to violently shake as the girls scream. The California Highway Patrol said the 18-year-old driver, Obdulia, was under the influence when the car rolled over into a barbed-wire fence before coming to a rest in a field. Jacqueline, the drivers younger sister, was in the back of the car without a seatbelt and was killed when she was ejected from the vehicle. Obdulia is currently being held in the county jail on charges of vehicular manslaughter while under the influence.

Of all the hazards drivers confront on America’s roadways each day, perhaps none are as preventable as the accidents that occur from distracted driving and driving under the influence. Each year, several thousand Americans die due to distractions that take their attention away from the road.

How Bad is the Problem?

Distracted driving is no minor concern. In fact, it affects the lives of thousands of Americans each and every year. A look at some key statistics tell the tale:

Is Anybody Doing Anything About It?

Statistics have consistently shown that roughly 25% of all crashes in Texas are in some way related to distraction. The good news is that efforts to reduce distracted driving have been underway for some time now. Texas just recently passed a bill that will make it illegal to text and drive and goes into effect starting this September.

Those specific device-related bans do not cover all forms of potential distractions, of course. To deter those other forms of activities, states usually rely on more general traffic laws to coerce drivers into behaving responsibly. There are also driving statutes that generally prohibit drivers from engaging in any activities that are not central to the operation of their motor vehicles, or which could be reasonably expected to impair that operation.

What Can You Do?

For the most part, individual efforts to avoid distracted driving tend to focus on what most people would consider “common sense” solutions. Still, it is not enough to understand the things that you should do while driving; it is quite another to actually act on that information.

Distraction can be a danger to everyone who takes to the road, but it is a danger that is eminently preventable. By being aware of the risks and taking active steps to limit the distractions that impede your concentration, you can do your part to reduce the dangers of distracted and drunk driving and make the roads safer for all who use them.