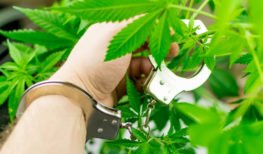 One day you’re the assistant coach of a high school football team and the next you’re being convicted of drug charges. At least that’s what happened to 37-year old and former NFL wide receiver, Henry Jamaar Taylor.

Back in May, an unknown source called Hidalgo County Sheriff’s Office about a man carrying a gun into a house on Tangerine Drive in Mission, TX. The house belongs to Taylor’s father; when police entered they found much more than just a gun. The officers discovered two marijuana plants growing in one of the bedrooms that Taylor’s father admitted belonged to his son (to whom he referred as a “marijuana user”).

On July 3, Taylor was arrested for possession of marijuana of 2 ounces or less. He could be fined up to $2000 and face up to 180 days in jail. Texas law states, “Under 2 oz.: Class B misdemeanor; 2-4 oz.: Class A misdemeanor; 4 oz. to 5 lbs.: State jail felony; 5-50 lbs.: 3rd-degree felony; 50-2000 lbs.: 2nd-degree felony; Over 2000 lbs.: Texas Dept. of Criminal Justice institution for life or 5-99 yrs. and $50,000. Some court districts in Texas have drug diversion programs that allow certain first-time offenders to complete a rehabilitation program instead of serving a prison sentence.” During the arraignment, Taylor did not have an attorney representing him, and his bond was set at $2500. He was released later that day.

Although no statement has been made from the Edinburg school district, this is not the first time the athletic department of Robert R. Vela High School has had trouble with the law. Coincidentally, RVHS Head coach, John Campbell was arrested back in January for a class A misdemeanor DWI charge and has a scheduled hearing next month. Penalties for a first time DWI offense are as follows: A conviction with less than a .15 BAC includes the possibility of a fine not to exceed $2,000.00 and/or a jail sentence from 3 days to 180 days, and a driver’s license suspension of 90 to 365 days. (Class B Misdemeanor). However, if there is a BAC .15 or more, the possibility of a fine increases to $4,000 and jail increases to 1 year. First-time offenders who had a BAC of .08 to .14 may apply for a “non-disclosure” two years after your probation ends. You must still install an ignition interlock device on your vehicle and keep it for 6 months. The benefit of the non-disclosure is that it can restrict who can see your criminal record.