History of Halloween and Common Myths 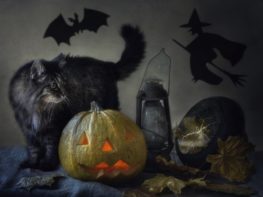 Some people once considered Halloween to be the eeriest time of the year, but for many others today, this great American celebration is one where people can dress up in costumes like their favorite heroes, wandering the neighborhood while little children go trick or treating in colorful style.

The History of Halloween

But how did Halloween really come to be? Its origin can be traced back to some ancient Celtic festival over 2000 years ago called Samhain. The Celtic New Year began on November 1 and so they believed that on the day before the New Year, the boundaries between the realms of the living and the dead were open and unattended and so ghosts and spirits could cross freely into the earth. To protect themselves, people would light bonfires and wear costumes that disguised them from the ghosts.

Sometime in the 8th Century, as the influence of Christianity extended into the Celtic lands, Pope Gregory III designated November 1 as All Saints Day to honor departed saints. Some say the church was trying to place the Celtic festival of the dead with a more church approved one. The preceding day, October 31 was known as All Hallows Eve or the day on which the Hallows Mass was celebrated which is where the name Halloween came from. Centuries going by saw the incorporation of pranks, costume-wearing, trick or treating, carving of pumpkins, and eating of sweet treats into the celebration. Colonists from Britain and the surrounding Islands brought this celebration into the United States, although it was only being practiced in the southern United States as migrants flooded into America from Europe in the 19th Century, they helped to popularize the celebration of Halloween around the country.

1. People are poisoning the candy:

One common fear of parents during Halloween is that their kids will be given poisoned candy or treats laced with LSD based on the myth that there are Halloween sadists around. But there has been no real evidence to justify such claims. The only proven case of a child dying from poisoned Halloween candy occurred in 1974 when a boy was poisoned by his father on Halloween to claim the insurance money.

2. Halloween is a satanic holiday.

It’s quite common to hear people say that Halloween is a celebration devoted to devil worship but the truth is that the early Celtics from whom we got the festival had no conception of the devil as we know it so they couldn’t have been worshipping him. Scholars say the ancients Celts were distinctively polytheistic in beliefs and as such had no knowledge of what we call Satanism today.

3. There’s no Halloween without pumpkins.

We can’t quite imagine Halloween now without pumpkin carvings but the original jack-o’-lanterns were actually carved from Turnips and not pumpkins. People in England often carried the turnips in a practice called ‘souling’ that involved them asking for food door to door in exchange for prayers for the dead.

Herrman and Herrman enjoy enlightening their readers with these fun-fact/myth-busting articles just as much as we love bringing awareness about current events.  life isn’t all fun and games sometimes. We love seasonal holiday fun, but when you or a loved one is injured due to someone’s negligence, the fun ends and we buckled down and get serious.

We serve all of South Texas, with offices in Corpus Christi, San Antonio, McAllen, and Brownsville. With over 100 years of combined experience, our attorneys have successfully resolved over 20,000 cases involving car, truck, and motorcycle accidents, as well as injuries caused by faulty products, slip and falls, and workplace accidents. If you or a loved one is ever injured during the holidays be sure to contact us at 361-882-4357 or via our website at   htps://www.herrmanandherrman.com/contact-us/ for your free consultation.