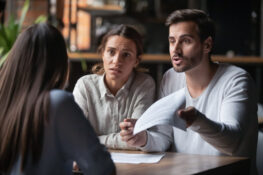 In 1870, the industrialized asbestos industry began. By the early 1900s, physicians had already begun to notice breathing problems in exposed workers. British authorities had published information about the hazards of asbestos exposure and the danger it posed on workers’ health in 1898. Information discussing the health risks were not published until 1918. Asbestosis was first diagnosed in the 1920s and by 1942 medical professionals had determined asbestos exposure was linked to cancer. This is when mesothelioma diagnosis surfaced in medical publications.

Despite the medical publications, many companies continued to manufacture and sell asbestos products. They continued to expose workers to the asbestos without providing proper protective gear to prevent inhalation of the toxic fibers.

In 1935 fifty of the largest companies in the U.S. came together for the “Symposium on Dust Problems at the Mellon Institute of Industrial Research.” By 1936 the industry created the Air Hygiene Foundation (later renamed in 1941 to the Industrial Hygiene Foundation). The name gives the impression that the chief goal was to promote safety, however it was for the protection against occupational injury claims. The Industrial Hygiene Foundation and other industry created trade groups created official standards with no evidence, studies, or research that the standards worked to prevent mesothelioma or asbestos related diseases.

As time went on, asbestos manufacturing company executives covered up asbestos-related illnesses among their workers. Doctor’s notes and reports outlining the dangers of asbestos were hidden from employees and the public. These executives would offer small amounts of compensation to workers suffering with health problems on the job. These payments pressured workers to keep quiet about the cause of their illnesses.

In 1977, the truth was uncovered when attorneys representing asbestos victims revealed the Sumner Simpson papers, which exposed the decades of concealment by the industry executives. Once the information was revealed, there was an increase in mesothelioma and asbestos lawsuits allowing justice for the innocent victims who suffered as a result of greed and negligence.

For decades, the number of asbestos victims piled up as the epidemic unfolded slowly.

The American Law Institute published “The Restatement of the Law of Torts” in 1965. This stated that anyone “who sells any product in a defective condition unreasonably dangerous to the user or consumer or to his property is liable for the harm caused by that product to the consumer or end user.” The courts agreed asbestos manufacturers knew the dangers of asbestos exposure but failed to warn asbestos workers and consumers. This opened the door for asbestos related lawsuits.

1966 – The First Asbestos Lawsuit Was Filed

Claude Tomplait was an insulation worker who was diagnosed with asbestosis in July 1966. Attorney Ward Stephenson filed the first asbestos products lawsuit on Tomplait’s behalf in December 1966.
The defendants were 11 manufacturers of asbestos insulation products. The case went to trial on May 12, 1969 and the verdict came back in favor of the defendants.

In October 1969, Attorney Ward Stephenson represented a co-worker of Tomplait, Clarence Borel. Borel had developed mesothelioma working in the shipyards and oil refineries on the Texas-Louisiana border.
Stephenson filed the lawsuit seeking $1 million in damages against asbestos manufacturers across the U.S.
Borel died of mesothelioma in June 1970, and wasn’t alive to hear the final decision from the Fifth Circuit U.S. Court of Appeals. In 1973. A verdict in the amount of $79,463 was awarded to Borel’s estate.

After hearing the success of Borel’s victory, asbestos workers turned to tort litigation to obtain compensation for their injuries. Other countries created centralized benefits systems for injured workers, U.S. mesothelioma patients were forced to rely on lawsuits.

Although there is no national registry for asbestos personal injury claims, independent reports show asbestos litigation has grown significantly during the past several decades. The RAND Institute for Civil Justice began analyzing asbestos litigation in the early 80s.

During the COVID-19 pandemic, asbestos attorneys moved to virtual and phone conferencing services to prevent infection risks for clients.

Lawyers, including mesothelioma lawyers, provide remote virtual consultations to help clients file claims during coronavirus without missing deadlines due to restricted travel, health issues, and to help contain the virus. Attorneys can handle all aspects of the legal process through video calls and electronic signatures.

Asbestos lawyers work to move mesothelioma claims through the court system as quickly as possible. Patients have been able to file some claims while the courts were closed, and local court officials have given priority to certain cases of the terminally ill.

WE CAN HELP YOU
If you or a loved one is suffering from a disease or illness related to asbestos exposure, the victim may recover compensation through a personal injury lawsuit. Compensable losses include property loss, medical expenses, lost wages, loss of future earning capacity, and pain and suffering.

Please do not wait to contact a Texas mesothelioma and asbestos exposure attorney at Herrman & Herrman, P.L.L.C., who will review the facts of your case and represent you through this difficult period.

CONTACT US
For more information or to schedule an appointment with an experienced Texas lawyer regarding mesothelioma or an asbestos related injury please contact us now!