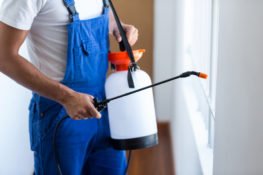 DeWayne Johnson spent the last 20 years as a groundskeeper for a school district near San Francisco, which meant that for two decades he applied Roundup weedkiller anywhere between 20-30 times each year. Johnson claimed that it was this pesticide application, and 2 incidents of being completely doused in the product, that caused his terminal non-Hodgkin’s Lymphoma.

If you’ve ever cared for a lawn of your own, or even strolled through a home & garden store, the Roundup brand will likely ring a bell. The herbicide is a staple in households and is the leading product designed for pest and weed control around the globe. Aside from the name brand recognition by homeowners, it is especially popular for large-scale farming. If Roundup sounded familiar then another buzzword that might ring a bell is Monsanto: the parent company responsible for producing it.

The company has spent the last few years defending consumer safety lawsuits. Court cases continue to pile up from plaintiffs all across the US claiming that their cancer, like Johnson’s, was directly caused by Roundup’s hazardous ingredient glyphosate.

This last Friday on August 10th a California court concluded that the controversial ingredient was directly linked to John’s cancer, awarding a $289 million judgment against the agricultural giant for its neglect in warning consumers about the potential risk to their health.

In 2015 the World Health Organization’s International Agency for Research on Cancer (IARC) added glyphosate to its list of carcinogens, and as Johnson’s case suggests the California courts when presented with the evidence agree.

The two main questions presented to the court were if the popular pesticide can cause cancer, and whether Monsanto failed to properly warn those using their product about the possible adverse side-effects such toxicity could befall them. The jury sided with the plaintiff on both fronts.

From a legal standpoint, the burden of proof was entirely on Johnson and his team. Monsanto, on the other hand, was not required to prove anything. Johnson’s team did not have to convince the jury that Roundup was the sole cause of his cancer, but rather that it was a “substantial contributing factor” to his illness.

Last week’s victory for those seeking justice in their cases against the agricultural giant is a bright light for those accustomed to the dark tunnel often encountered while navigating the legal process. Over 4,000 cases just like Johnson’s are awaiting trial in state courts across the country. For those seeking justice while battling cancer, it’s equal parts fighting for their day in court and fighting the clock.

There are also are an estimated 400 cases that have been filed in MDL, or federal multidistrict litigation, which is similar to a class action lawsuit but differs as each case within it gets its own trial and judgment. It’s a useful tool to consolidate pre-trial proceedings for efficiency’s sake but also means that one plaintiff might get a large settlement in their judgment while others could walk away with nothing.

One of the advantages for Johnson and others who don’t have the luxury of a lengthy trial is that cases filed in state courts could proceed faster than those in MDL, so a plaintiff will be able to finally receive validation and a financial settlement in less time.

Just days after Johnson’s verdict, Monsanto received another blow as the California Supreme Court rejected its attempt to have glyphosate removed from the state’s Proposition 65 list of carcinogens. However, another federal ruling concluded that no warning label be required on Roundup because it would violate the company’s free speech since other contradictory scientific studies found that the ingredient in question poses no harm to those who come into contact with it.

Despite the unclear future of Monsanto’s Roundup one thing is certain: for the thousands of other plaintiff’s waiting in the wings for their day in court this latest judgment sets the stage for the litigation that follows.