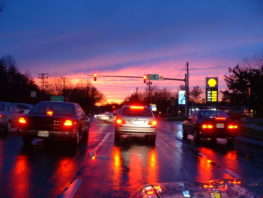 Researchers at the Massachusetts Institute of Technology (MIT), the Swiss Institute of Technology (ETHZ), and the Italian National Research Council (CNR) have developed a system that would allow cars to function efficiently through city intersections without the use of traffic lights. “Traffic intersections are particularly complex spaces because you have two flows of traffic competing for the same piece of real estate,” says Professor Carlo Ratti, Director of the MIT Senseable City Lab, which initiated the study and published the article “Revisiting Street Intersections Using Slot-Based Systems”. “Ultimately, it’s much more efficient because vehicles will get to an intersection exactly when there is a slot available to them.”

What sparked this endeavor were the startling statistics surrounding vehicles and available roadways in our cities. In Texas alone, congestion grows by 8% every year in some of its largest cities such as Austin, Dallas-Fort Worth, and Houston, where drivers spend an average of over 40 hours per year stuck in traffic. If you happen to live in those cities I’m sure you realize how big of an understatement that may be. Over the past 40 years, our population has doubled and the number of cars and trucks on the road has almost tripled. Over that same amount of time, however, our roadway capacity has only grown by a margin, 19%. You can see how unbalanced towards one another they have become which evidently has led to traffic congestion on a national level.

With cars evolving to be more autonomous and becoming what many refer to as ‘smart’, engineers are beginning to revolutionize how cities manage their traffic and more importantly how drivers manage themselves on the road. The age of the traffic light may soon be over as more technological advances arise and cars become capable of being able to drive themselves.

How Does It Work?

Imagine, no more red light tickets, no more slamming on breaks, and perhaps no more road rage. In comparison to the current state of the art traffic lights, the model presented by the researchers would double the efficiency of traffic to where cars would never have to stop and as a result, can keep traffic moving. Similar to aerial traffic, the system put forth by the researchers presents a slot based model in which cars would pass through intersections based on whether there is an available slot. When approaching an intersection, a vehicle will automatically contact the traffic management system and request access in which case every self-driving vehicle is then assigned an individualized time to enter the intersection, their ‘slot’. The sensor-laden vehicles pass through intersections by communicating and remaining at a safe distance from each other, rather than piling up at a traffic light. The system is flexible to where it can be designed to accommodate pedestrian and bicycle crossing with vehicular traffic, something cities like Corpus Christi could really use.

Corpus Christi had a total congestion cost in 2014 estimated to be around $179m. Companies see this and are spending vast amounts of money in researching and developing innovative ideas to propel the industry into a new modern era where not just cars are communicating but the roads as well. By avoiding the usual stop and go fiasco it can reduce the number of pollutants and greenhouse gases caused by acceleration and deceleration cycles. Using the model presented in the article, slot based intersections can double the number of vehicles that travel through intersections as opposed to the usual amount traditional traffic lights offer. Professor Dirk Helbing of the ETHZ stated that not only will the people benefit but “the environment would benefit, and cities would become more livable”. Although this particular model focuses on a very specific area of a much larger system, the idea is that by looking at models like this it can create conversation, debate, and solutions to form a more thorough discussion. With further research paving the way for sharper analysis, it is only time before we all say ‘why didn’t we think of this sooner’.