Pokémon GO Out of Control? 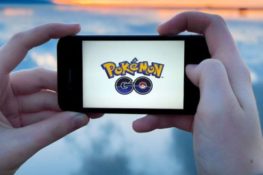 If you were a kid in the 90’s then most likely you aren’t reading this and are actually playing the new number one gaming app called Pokémon GO! The app which is taking the entire world by storm has caused a cultural flashback to one of the most popular animated series of the 90’s, Pokémon. Pokémon was a cartoon that had children of all ages watching the show, collecting their cards, trading them, and battling them with their friends. Now in 2016, the Pokémon franchise has become far less popular becoming nothing more than a whisper. However, that whisper has turned into quite the roar over the past week as millions of people have downloaded the Pokémon Go app and are reliving their old Pokémon trainer days. According to CBSN millions of people have downloaded the new gaming app making it one of the most downloaded apps ever! Nintendo is now worth $7 billion more than what it was last week which goes to show just how lucrative the free gaming app is. The game lets you catch virtual creatures called Pokémon in an augmented reality. Augmented reality (AR) is a live direct or indirect view of a physical, real-world environment displayed through your phone which lets you see where Pokémon are at and catch them. This is a refreshing and exciting new addition to the mobile gaming world as it pushes for its consumers to actually get up and walk around outside. Depending on the type of Pokémon you are trying to catch, some may be near parks, bodies of water, forests, and so on. The game also has what’s called Poke stops where players can meet up, strengthen their Pokémon and battle with one another. These stops are usually located at local hospitals, gyms, parks, and other popular hubs. This game may sound like quite the adventure, however, like with any adventure it can be dangerous and can lead to serious injuries if not careful.

Although the game is meant for you to walk, that does not stop people from driving around and catching these creatures. With texting and driving already a major influence on vehicular accidents, Pokémon GO and driving could make things worse as it could possibly double or triple the amount of incidents that happen due to driving while using a mobile device. Stories have already been circulating about how a lot of players have suffered an injury by walking onto roads, tripping over obstacles, stopping traffic, and even trespassing just to catch a Pokémon. ABC news had commented on the pandemic saying that being face down in a virtual world can prevent you from noticing dangers in the real world. Near St. Louis police arrested 3 teenagers as they lured Pokémon to attract players in an attempt to rob them at gunpoint. Another person was trying to find a water Pokémon at a local river and accidentally found a body! A story out of Massachusetts accused a 26-year-old man with causing one of the worst highway accidents after stopping in the middle of the road to catch a Pikachu! These are all surfacing only a week into the release of the new game which has caused leaders of communities to take notice at the real danger that is involved.

Jonathon Jarvis, director of the National Park Service, said in a Facebook message that “we don’t want you stumbling off the path or running into some of our real wildlife, while you’re looking for the flying, swimming and crawling creatures on your screens”. The Miami PD also released a video informing people of the dangers associated with playing and offered a few tips on how to play safe. Remember, as is first displayed when launching the game, BE AWARE OF YOUR SURROUNDINGS! On a side note if you happen to find a Pikachu in Corpus Christi or McAllen, please let us know.