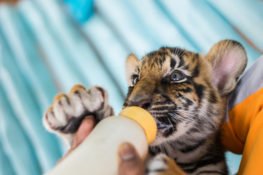 Gladys Porter Zoo nestled deep in the Rio Grande Valley is known worldwide for its exotic animals on display. This famous zoo is home to animals ranging from tropical America, Indo-Australia, Asia, Africa, and everywhere else in between. The exotic animals include Macaw Canyon, Galapagos Tortoises, Caribbean flamingos, spider monkeys, crocodiles, horses, camels, pileated gibbons, chimpanzees, rhinos, Arabian oryx, and so much more!

There is also plants and fish life you can enjoy at Gladys Porter Zoo. This time of the year is great to walk the trails as it’s not yet too hot outside. The spring and summer months are typically the busiest so arrive early or purchase your tickets ahead of time.

Given the location of the Gladys Porter Zoo, it’s not uncommon for them to encounter animals that are being smuggled into the United States illegally. Zoo officials have noticed that the tiger cub’s willingness to accept food and milk by other humans is indicative of its familiarity with humans and human interaction.

According to the United States Customs and Border Protection, the male cub was being smuggled by three unknown individuals. The tiger cub was found abandoned by these people in a black duffle bag near the United States-Mexico border. Although the tiger cub was severely dehydrated upon discovery, the veterinarians were able to treat him and he is in stable condition at the zoo.

While this story ended up being a successful recovery for the tiger cub, there are numerous other accounts that end in tragedy. It is important for residents of South Texas and the Greater Rio Grande Valley to stay vigilant. If you see something suspicious do not hesitate to contact agents with Border Patrol. You never know when you could be saving young wildlife.