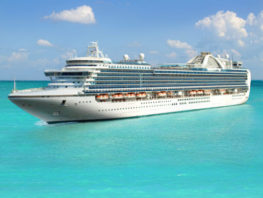 It seems a new bridge, new dog park, and more bike lanes aren’t the only thing coming to Corpus Christi. There is also talks about bringing the cruise industry to the Texas coast, somewhere between Calhoun and Cameron counties. Galveston is currently the only city in Texas that has a cruise ship terminal, but that may soon change. Local leaders held a hearing to express the merits and challenges of bringing such an industry so close to home. They stated that South Texas can handle a cruise ship terminal even before the completion of the new bridge set to replace the old Harbor Bridge.

The Harbor Bridge has a clearance of 138 feet, whereas the new bridge will have a minimum vertical clearance of 205 feet. This will allow for cruise liners to pass under and dock at a potential terminal.

There are already sites that have been brought up to house cruise ships near Ingleside which will serve as a temporary berthing place until the new bridge is complete. Committee chair State Senator Lois W. Kolkhorst predicted that South Texas would have a cruise ship terminal within the next five years.

One of the major points given was the fact that the State of Texas is growing at a very fast rate and with that comes the necessity for jobs and a thriving economy. According to the Cruise Lines International Association, an estimated 11.2 million people in North America took a cruise in 2014. The demand alone for cruising has increased 68 percent over the past 10 years and the industry is now valued at an astounding $21 billion.

There are 4.8 million people living within the 41 counties that make up South Texas. Mayor of Corpus Christi, Nelda Martinez, stated: “It makes sense to have the cruise ship industry in this ready-made area for cruise ships.” Speakers at the hearing overwhelmingly favored the idea of the cruise industry coming to Corpus Christi.