Home Blog Articles Sports Lawsuits – Believe It or Not

Sports Lawsuits – Believe It or Not 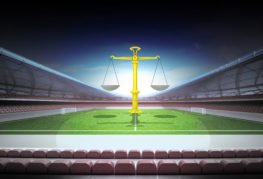 Lawsuits and sports do not typically go hand and hand. However, there are several instances when the two come together and the results can be quite amusing. Below are a few chosen sports lawsuits that are so incredible it is almost hard to believe they’re real. This is the “Ripley’s Believe It or Not” of sports lawsuits.

In 2010 a fan of the New York Jets football team of the NFL sued the New England Patriots. The suit filed on the basis of allegedly videotaping the Jets coaches during a game in 2007. Although the two teams can be considered bitter rivals, this fan was more than upset with the Patriots. He was seeking $185 million dollars. It might not surprise you to learn the suit was later dismissed. Talk about being a sore loser.

Staying in the NFL, a fan claimed to sustain a personal injury at the Dallas Cowboys summer practice. While watching her favorite National Football League team, a woman claimed to severely burn her buttocks from sitting on a very hot bleacher seat. The fan allegedly sustained second-degree burns which required treatment. The fan sued for mental anguish and physical dismemberment. The suit was later dismissed. Apparently, fain loyalty is not what it once was.

Moving over to the National Basketball Association where everyone wants to see the top players play. The NBA is much different than other sports due to the fact that only 5 players play the majority of the time. This makes those 5 players very important not only to the team but the fans. In 2010, a Miami Heat fan was particularly upset that they went to a game in which the coach decided that game he was going to rest his top players. Essentially the fan was deprived of seeing world-class talent that he anticipated seeing when he purchased the ticket. Because sports is an entertainment industry that would not exist but for fans, this fan actually had a legitimate argument and filed suit. Despite seeming to have a point, this case was later dismissed.

Because sports and lawsuits live in two totally separate worlds, when the two do come together, it can be seen as rather odd. The above stories are just a few in which the legal world and sports world collided. The results were about what you could expect. Fans are no doubt passionate about their sports and we would expect nothing less when they set their eyes on a lawsuit.

About the Firm: Herrman & Herrman P.L.L.C.

Our firm is equipped with over 100 years of combined experience handling personal injury cases across Texas. Our outstanding record of favorable settlements and verdicts includes over 20,000 successfully resolved cases. Once we take on a case, we are relentless and you can rely on us to pursue full compensation for you.