Home Blog Articles Summer Danger: Heat Stroke in Texas and How to Avoid it

Summer Danger: Heat Stroke in Texas and How to Avoid it 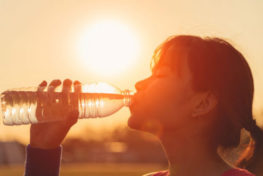 While most people think of Texas as a place where warm weather is a constant fact of life, residents and visitors to the state can actually experience a fairly wide range of temperatures throughout the year. Like many other places across the United States and around the world, the winter months are relatively mild and provide average high temperatures in the 50 to 60-degree range. It is during the summer months that the common Texas weather stereotype actually matches reality. Between the months of June and August, average high temperatures exceed 90-degrees Fahrenheit, and with that heat comes the risk of heat stroke. That summer danger is an ever-present concern in Texas and something that everyone who lives in or visits the state needs to better understand.

Many people fail to grasp just how dangerous heat stroke can be. In fact, there are many who confuse this condition with common heat exhaustion, and that can cause them to ignore many of the most obvious signs of danger. According to the Centers for Disease Control and Prevention (CDC), heat exhaustion is typified by weakness, profuse sweating, erratic pulse, dizziness and nausea, and cooler than normal skin. Heat stroke is a direr condition that involves more severe symptoms such as body temperature that rises above 103 degrees, very rapid pulse, hot and often reddened skin, and potential loss of consciousness.  Heat exhaustion can make you ill and uncomfortable and may require medical help. Heat stroke, on the other hand, can quickly turn fatal.

How Prevalent is this Danger?

Despite widespread efforts to educate the public, heat-related illnesses and deaths still occur across the state each year. A look at just one county in Texas offers a snapshot of just how dangerous this phenomenon can be. In the September 12, 2015 Dallas County Health and Human Services Heat-Related Illness Surveillance Report, the county documented the following heat-related statistics in that county alone:

Even when death does not occur, the impact of high temperatures is felt in other areas of life as well. For example, there were a total of 3,100 American workers who missed time from work in 2006 due to illnesses related to heat stress and exhaustion. Those illnesses and time away from work come with a cost that can total many millions of dollars in lost wages and productivity.

Groups Most at Risk

The Texas Heart Institute notes that heat exhaustion is a phenomenon that typically afflicts those who fail to drink enough liquid while they are exposed to high temperatures. The condition most commonly affects children, older people, patients suffering from hypertension, and athletes and workers in high-temperature environments.

Heat stroke also affects smaller children and elderly people, as well as those who are chronically ill and taking various medications to control disease or other medical conditions. It can also impact athletes, though most experienced athletes typically know how to remain properly hydrated and rested. Even pets can suffer from heat stroke and require immediate medical attention when symptoms first appear.

For some time, football players were considered to be among the most dangerous sports where high temperatures are concerned. In fact, between the years 1995 and 2009, a total of 31 football players died from heat stroke. Since that time, greater awareness and renewed emphasis on player safety have given some a false sense of security about the issue, but most experts remain concerned about the increased risk fully-uniformed players face when competing in warm temperature environments.

Public Efforts to Address the Problem

The Texas Department of Insurance is just one agency in the state of Texas attempting to deal with the ongoing epidemic of heat-related illnesses and death. As part of its campaign to help employers reduce the rate of heat exhaustion and stroke in the workplace, the agency’s Division of Workers’ Compensation provides companies with information designed to raise awareness of the issue and help better protect employees. The Occupational Safety & Health Administration (OSHA) offers similar guidance at the national level, with a variety of educational resources and training that employers and employees can use to guard against the health dangers posed by high temperatures.

The good news is that most heat stroke and exhaustion is preventable if the proper precautions are taken. Treatment varies depending upon the severity of the illness, of course:

Heat cramps are the first sign that heat exhaustion is imminent and usually involve the leg and stomach muscles. Rest and hydration are usually all that is needed to recover.

With heat exhaustion, immediate treatment is necessary to avoid further complications. The victim should be moved to a cool location and provided with water. If vomiting occurs, or the patient loses consciousness, medical treatment should be administered as well.

Heat stroke involves an effective shutdown of the body’s ability to regulate heat. When it occurs, medical help should be called in immediately. While waiting for help to arrive, it is important to remove the victim to a cool location and take steps to reduce core body temperature by applying water-soaked towels to the body. Conscious victims should consume water in small amounts to being rehydration.

The good news for patients suffering from heat-related trauma is that the worst effects of heat exhaustion and stroke can usually be avoided through a combination of increased awareness of temperature and avoidance of overexertion in high heat environments. When the heat gets the better of you, however, never hesitate to seek the medical attention you need.