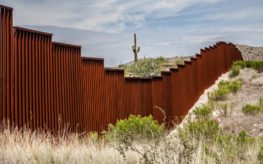 Recent reports of the Department of Interior taking action in the Rio Grande Valley has the Texas/Mexico border in the headlines once again. Park Police and National Service law enforcement has been sent to address the growing border issues and challenges.

However, for citizens who live in these border towns, the depiction seems more like a war zone than it actually is. While the border towns of the Rio Grande Valley have been sensationalized by the media and certain politicians, these small cities are nowhere close to the lawless, wild west that is being portrayed. People are still living their daily normal lives just like any other towns you may find in America. Sure, crime is increasing as the population increases. But that is typical in any metropolitan area in the United States.

One could argue the Rio Grande Valley is actually much safer than other metropolitan communities in America because of the added security. These border communities have the United States Border Patrol, Immigration and Customs Enforcement, Texas Department of Public Safety, and National Guard stationed in their towns. This is in addition to the local law enforcement that is already present in the cities. According to Pew Research Center’s murder rates, no border town even made their list of the top 30 most dangerous United States cities for murder.

While there is a serious border security challenge facing our nation, it is not a war zone in the Greater Rio Grande Valley, despite what is reported by the national media. Steps are being taken by the proper law enforcement agencies to ensure that the people who occupy these areas do not have any disruption in their day-to-day lives. Since the last election, illegal immigration is actually at an all-time low and has helped put everyone at ease in these communities.

For locals, it’s simply business as usual. McAllen residents who grew up in the area have experienced little to no change in the way they live, work, and enjoy the city they are a huge part of. These border towns are a tight-knit community made up of the melting pot of the south. It is small enough that everyone still knows everyone and big enough to where there is always something new to explore. Wall or no wall, border or no border, these folks are still loving the Greater Rio Grande Valley and that is what truly matters.