Top 5 Lawyer Movies of All Time! 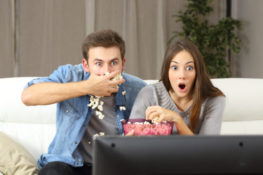 The public has long romanticized about the life of a courtroom advocate. From dramatic witness testimony to the heart inspiring closing arguments, movies about lawyers have been around for decades. While the real lives and cases of most attorneys won’t come close to the excitement portrayed on the big screen, it’s fun for the mass audiences (and the real-life attorneys) to curl up in a recliner with some popcorn and enjoy what Hollywood has to offer. Here are our top 5 picks for courtroom movies.

1. To Kill a Mockingbird

Small-town Alabama, 1932. Atticus Finch (played by Gregory Peck) is a lawyer and a widower. He has two young children, Jem and Scout. Atticus Finch is currently defending Tom Robinson, a black man accused of raping a white woman. Meanwhile, Jem and Scout are intrigued by their neighbors, the Radleys, and the mysterious, seldom-seen Boo Radley in particular.-According to IMDB.com

Erin Brockovich is an unemployed single mother, desperate to find a job, but is having no luck. This losing streak even extends to a failed lawsuit against a doctor in a car accident she was in. With no alternative, she successfully browbeats her lawyer to give her a job in compensation for the loss. While no one takes her seriously, with her trashy clothes and earthy manners, that soon changes when she begins to investigate a suspicious real estate case involving the Pacific Gas & Electric Company. What she discovers is that the company is trying quietly to buy land that was contaminated by hexavalent chromium, a deadly toxic waste that the company is improperly and illegally dumping and, in turn, poisoning the residents in the area. As she digs deeper, Erin finds herself leading point in a series of events that would involve her law firm in one of the biggest class action lawsuits in American history against a multi-billion dollar corporation.-According to IMDB.com

In this dramatic courtroom thriller, LT Daniel Kaffee, a Navy lawyer who has never seen the inside of the courtroom, defends two stubborn Marines who have been accused of murdering a colleague. Kaffee is known as being lazy and had arranged for a plea bargain. Downey’s Aunt Ginny appoints Cmdr. Galloway to represent him. Also on the legal staff is LTJG Sam Weinberg. The team rounds up many facts and Kaffee is discovering that he is really cut out for trial work. The defense is originally based upon the fact that PFC Santiago, the victim, was given a “CODE RED”. Santiago was basically a screw-up. At Gitmo, screw-ups aren’t tolerated. Especially by Col. Nathan Jessup. In Cuba, Jessup and two senior officers try to give all the help they can, but Kaffee knows something’s fishy. In the conclusion of the film, the fireworks are set off by a confrontation between Jessup and Kaffee.-According to IMDB.com

Mick Haller is a defense lawyer who works out of his Lincoln. When a wealthy Realtor is accused of assaulting a prostitute, Haller is asked to defend him. The man claims that the woman is trying to get some money out of him. But when Haller looks at the evidence against him, he learns that this case might be linked to an old case of his.-According to IMDB.com

Wendell Rohr is a torts lawyer taking on the gun lobby. Rankin Fitch is the jury consultant for the Defendants and between them, the battle is for the hearts and minds of the jury. But there is someone on the inside. Nicholas Easter is a juror with a girlfriend, Marlee, on the outside. they have a past ….. and their own agenda. According to IMDB.com