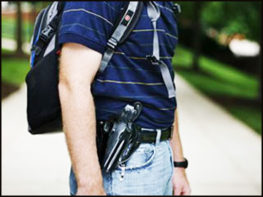 Yesterday marked the 50th anniversary of the horrific shooting that took place at the iconic tower at the University of Texas. Charles Whitman was a trained marine sniper who positioned himself atop the 27-story UT tower in 1966 and began shooting at will. This was the first mass shooting on a campus in American history with a total of 17 killed and an additional 30 injured until police were able to stop him. 50 years later, Texas’ campus carry law begins on the same day. The law, which went into effect yesterday August 1, allows those above the age of 21 and who have a concealed handgun license to carry their guns at public universities. Private universities have the option to opt out and refuse to allow guns on campus, which is what a vast majority are doing. Public Universities, on the other hand, are not but are able to designate ‘gun free’ zones.

Senate Bill 11, or campus carry, was pushed by Gov. Greg Abbott and the Republican legislative majority. For months there had been a fair amount of debates, protests, and criticism targeting the new bill. Opponents believe that this law will chill free speech on campuses and could potentially lead to more suicides. One faculty member, the former dean of the UT School of Architecture, left UT for a position at the University of Pennsylvania due to his disagreement with allowing guns on campus. The president of UT at Austin takes issues on guns very seriously and aims to create policies that will conform to the new law, and ensure the safety of the entire campus, according to a statement released earlier this year.

Texas A&M University Chancellor John Sharp wrote in a letter that “having licensed gun owners in possession of legal weapons on our campuses does not raise safety concerns for me personally, the real question is this: ‘Do I trust my students, faculty and staff to work and live responsibly under the same laws at the university as they do at home?’ Of course I do!” The University of Texas Rio Grande Valley police chief stressed that if ever there is an emergency on campus that students who are allowed to carry should not intervene and try to help, instead, use the gun to protect themselves but do not attempt to stop a serious situation.

Texas is not the only state to allow concealed guns on campus. The map below shows which states allow guns on their campuses and to what extent.