Is Vaping Safer Than Traditional Smoking? 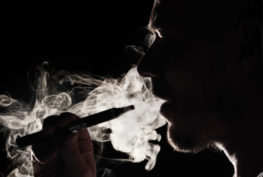 Over recent years, vaping has become known for being a ‘safe’ alternative to smoking cigarettes. The battery operated device can look like a real cigarette or pen, depending on which one you buy (there are hundreds of different brands). However, there hasn’t been much data collected to fully assert the notion that they are in fact safer. What we do know is what goes in them and how they work. So here are a few points to consider before turning to these alternative cigarettes.

There are a variety of different types of vapes that one can choose from. The most common out of the group is the pen-shaped rechargeable devices that have a refillable tank which holds a nicotine-laced liquid flavor compound. Essentially, it’s the liquid that’s being inhaled. It’s vaporized, not burned, by a heating element in the pen and produces an aerosol which can deliver nicotine to the user. Sounds neat right? However, although many assume that e-cigarettes are less toxic than your usual cancer stick, there just isn’t enough research done on the topic to wholeheartedly back that up.

One of the main reasons that people are drawn to vaping is the array of flavors that can be used. Not only do these e-cigarettes pose as safer alternatives, they also give smokers a sweet departure from the old cigarette taste. The FDA has approved these flavors as safe for consumption, yet the environment in the stomach is far different than the lungs.

How Are They Used

Some e-cigs can be adjusted to deliver more vapor and provide stronger hits. When an e-cig liquid or juice is heated, a group of compounds known as carbonyls is produced, such as formaldehyde and acrolein. There is no telling how much of these carbonyls are released because of the varying heating levels, which is why researchers have such a hard time in determining the effects. While there is plenty of research done on how a traditional cigarette is smoked, there is very little consistency when it comes to e-cigs. Sure it may be true that one puff off an e-cig is less toxic than a cigarette, yet how many puffs are the typical e-cig user taking in comparison to a traditional cigarette smoker.

There have been reports of e-cigs exploding. Some reports tell of them exploding in their pockets while others are in their face. What is happening is a malfunction in the battery component which can lead to burns on the hand and face, fractured bones, and even loss of eyesight. The shape of these products, especially with lithium-ion batteries, causes them to behave like rockets if a battery is to fail.

One of the main reasons for these unfortunate accidents is the fact that there are no standards being applied to the manufacturer. There are no warning labels associated with most e-cigs in which consumers are left not knowing any potential safety hazards. The batteries commonly used are small and powerful which, if they fail, can lead to disastrous results.

Diacetyl, which is used in a variety of food products, is hypothesized to impair the function of immune cells within the respiratory system. Yet, in a recent experiment by the Harvard School of Public Health, the study showed that 39 out of 51 e-cigarette flavors still had traces of diacetyl which OSHA now categorizes as an “inhalation hazard”. Other chemicals contained in the liquid are a mix of propylene, glycerin, nicotine, and flavoring agents.

In another experiment, researchers and toxicologists from the University of North Carolina took tissue samples from non-smokers, cigarette smokers, and e-cig users to study the impact of vapor on immune gene function. Samples showed suppression of immune genes in the nasal mucosa for both smokers and e-cig users. However, that wasn’t all that e-cig users showed. They also displayed a suppression of additional immune genes suggesting that flavor compounds could suppress immune function more broadly than cigarettes.

The question we all need to be asking then is not whether an e-cig is safer than a traditional cigarette, but whether or not they are less dangerous. In the end, you’re still inhaling hot aerosol particles, aldehyde, and nicotine which according to Dr. Stanton Glantz, a professor of medicine at the University of California, San Francisco, is “not so good.”