Xarelto and Side Effects 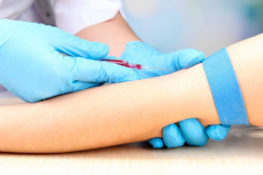 Xarelto is a blood thinner used to prevent the formation of blood clots. It is prescribed for patients with atrial fibrillation, a heart rhythm irregularity, and for patients who are undergoing certain types of joint replacement surgery who are at risk of developing deep vein thrombosis, a condition that may lead to blood clots in the lungs and other parts of the circulatory system.

Xarelto was introduced on the market in 2011, making it relatively new. The manufacturer, Janssen Pharmaceuticals, promoted it as an alternative to Warfarin, requiring no monitoring.

However, patients absorb the drug at different rates. Some patients who have taken Xarelto experienced uncontrolled bleeding, which may lead to serious injury or death. Unlike Wayfarin, however, Xarelto has no antidote if a patient experiences internal bleeding. The blood thinner must pass out of the system gradually, meaning it could be too late for the victim. There have been numerous reports of uncontrolled bleeding, causing serious side effects including death, according to the Institute for Safe Medication Practices.

In some cases, drugs are released on the market that have not been tested adequately, and side effects from long term usage do not become evident until years later. After release upon the market, some medications are then discovered to have harmful, or even fatal side effects.

Serious Xarelto side effects may require emergency treatment, particularly when any unusual bleeding develops. Some minor side effects can include muscle pain, itching, and pain in the arms and legs. Any significant changes are to be reported to your doctor. Serious side effects are the major concern with this medication. They include:

Uncontrolled bleeding is by far the most serious side effect and can happen in critical body organs, sometimes result in the need for blood transfusions to keep the patient alive. If a patient has spinal defects or is receiving spinal taps, it can even lead to bleeding that could potentially lead to paralysis. There are many other possible side effects that can result in injury or death.

Get prompt medical attention if you suffer a serious side effect from any drug. Consult your doctor if any allergic reaction or other symptoms appear after using any medication.

When a medication is on the market with insufficient warnings or causes unintended adverse effects, the pharmaceutical company, its subsidiaries and distributors may be held responsible for the product.

If you or a loved one has suffered from harmful side effects of the medication Xarelto, contact our team of attorneys to review the specifics of your case and explain your legal options. Get a free consultation and we can determine which parties are responsible for your injuries, such as the manufacturer, medical facilities, pharmaceutical companies or another party. We leave no stone unturned to help you to seek the care and compensation you are entitled to.