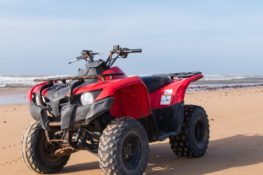 Fed officials say now is the time to ban ATVs and off-road vehicles from Boca Chica Beach. With Space-X launches starting as soon as May 2019 at their Boca Chica site, this made a good time to issue the ban.

This ban will not affect vehicles who will still be able to drive to the areas to reach fishing spots or South Bay and the jetty, just the new rules make it easier to clear the beach during space launches for safety reasons.

Those that are caught in violation are subject to fines and confiscation, which in the past may not have been heavily enforced due to land ownership and access, but most of the properties have now been brought under their control which will allow for more effectiveness of enforcement. The rest have been identified making officials very optimistic in enforcement.
The Dune Protection Act, which is still in place, is meant to not have any kind of vehicle in those areas because it’s vegetated and that helps stabilize the banks because that is the first line of defense for flood control. Additionally, these dunes are nesting sites for threatened birds and critically endangered Kemp’s ridley sea turtles are making Boca Chica a re-established nesting site.

Certainly on the minds of many is while driving up Highway 4 at the end of the beach seeing the damage from miles away of all the dune trails. The years-long destruction by these people who in the past have even taken down signs protecting the areas is now coming to an end.

Sea Turtle Inc. and U.S. Border Patrol will be exempt from the ATV and off-road ban while they perform their patrolling duties.

Here is to hoping that the Space-X launches actually come to fruition but at the same time don’t actually cause more damage than the ATVs and off-roaders who may have driven illegally in the past through these same areas. Boca Chica beach is a treasure nobody wants to see affected negatively in any way like ATV accidents.