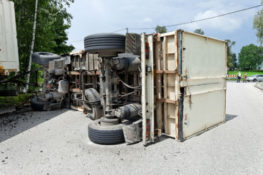 Vehicle manufacturers have made significant advancements in vehicle safety over the past few decades. Some of the safety advancements include adaptive headlights, rear-view cameras, lane departure and blind spot warning systems, anti-lock braking systems, electronic stability control, and parking assistance technology. One of the most innovative in-vehicle crash avoidance technologies involves forward collision avoidance and mitigation braking (F-CAM) systems. This crash avoidance technology is capable of reducing the risk of serious injuries in accidents and saving lives.

Fortunately, auto manufacturers are installing many of these technologies as basic features in newer vehicles. However, truck manufacturers and federal regulators are falling behind in including these same lifesaving technologies, particularly F-CAM systems, in all newly manufactured commercial trucks. Safety advocates hope to change this by asking the U.S. Department of Transportation to require collision avoidance and mitigation braking systems as a safety feature on new trucks and buses with a gross vehicle weight rating (GVWR) of at least 10,000 pounds, according to Saferoads.org.

To detect when a vehicle may be getting too close to another vehicle, F-CAM crash avoidance technology uses cameras, radar, light detection and ranging systems (for distance), and other sensors. When the sensors detect a problem, the driver receives an alert through the Forward Collision Warning (FCW) system to alert of an impending collision. In most cases, this could be all that is needed for a driver to take action and prevent a collision.

If the F-CAM system determines a collision is imminent, and the driver does not take action, the Collision Mitigation Braking (CMB) system automatically applies the brakes to avoid a collision or minimize the severity of the accident through reduced speed. The National Highway Traffic Safety Administration (NHTSA) estimates that existing F-CAM systems are capable of preventing more than 2,500 vehicle-related accidents each year, and future advancements in this technology could help prevent upwards of 6,300 collisions a year.

Why Crash Avoidance Technology in Trucks Is Necessary

Statistics from the NHTSA reveal that approximately 2.3 million people sustained injuries and another 32,719 people lost their lives in vehicle-related accidents in 2013. Drivers and passengers of large trucks accounted for 691 of the fatalities and 24,000 injuries. Additional people killed in large truck crashes during 2013 included 2,834 other vehicle occupants and 439 non-occupants. In total, 3,964 people, or a little more than 10 percent of the total motor vehicle fatalities, died in accidents involving large trucks.

What makes a large truck is so dangerous is its size, the weight of the cargo it is carrying and the speed at which it is traveling. Truck drivers who violate federal hours-of-service regulations or fail to adhere to the rules of the road also increase the risk of being involved in a deadly accident. Motorcyclists, and drivers and passengers in other vehicles are at very high risk of serious injury or death when involved in an accident with a large commercial truck, while the truck driver often remains unharmed.

Requiring the installation of F-CAM crash avoidance technology in all new large trucks could help minimize the risk of rear-end collisions and fatal truck accidents, particularly those involving a drowsy or distracted truck driver.