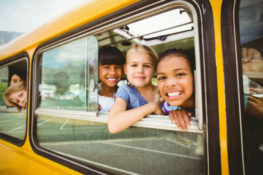 Back-to-school season is a busy and exciting time of year. It can also be a dangerous time of year as teenage drivers, harried parents, school buses and others all head to school at the same time. With millions of Texas children soon returning to school, we turned to the Texas Department of Transportation (TxDOT), National Highway Traffic Safety Administration (NHTSA) and others for some reminders about being cautious in school zones and safe around school buses.

To do your part for school bus safety:

Distractions, negligence, and lack of familiarity with traffic patterns can lead to car accidents in school zones.

In 2013, the TxDOT says, 625 vehicle accidents occurred in school zones in Texas, resulting in two deaths and 112 serious injuries. In August and September, there were 104 collisions in school zones. The most common contributing factors to these accidents were driver inattention, failure to control speed and failure to yield the right-of-way at stop signs.

Accidents Increase as Days Get Shorter

The changing seasons will make matters worse, reducing visibility. Texas’ monthly crash statistics show a significant jump in October and high rates through the end of the year.

As the autumn sun sits lower in the sky, its glare makes it harder for drivers to see during afternoon commutes. As the days grow shorter and the time changes, some of us will send our kids off to school in the dark and those who participate in after-school activities will come home in the dark, as well. Darkness increases the potential for car accidents and for pedestrians or bicyclists to be hit by cars.

Returning to school means it is time to be on our best behavior, as students and drivers.

Adopting safe driving habits now will help protect our children, friends, neighbors, and others as the new school year begins and for long afterward.

If your child has been harmed in an accident caused by another motorist in Corpus Christi, let an experienced car accident lawyer review the specifics of the accident and explain your legal rights.