Home Blog Personal Injury I Was Injured at a Baseball Game: Who is Responsible?

I Was Injured at a Baseball Game: Who is Responsible?

Posted by Kristopher Rodriguez on June 20, 2017 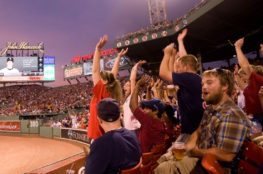 On March 16, 2002, 13-year old Columbus Blue Jacket fan, Brittanie Cecil, was struck in the head by a hockey puck at a game at National Arena; two days later, she died. In March 2011, San Francisco Giants fan, Bryan Stow, was attacked outside of Dodgers Stadium. His injuries, which included a traumatic brain injury, kept him in hospitals and other healthcare facilities for two years. On July 7, 2011, 39-year old firefighter, Shannon Stone, died after falling from the stands at Rangers Ballpark as he tried to catch a ball hit by slugger Josh Hamilton.

Each year over 15 million people attend sporting events in the United States. One study found that during 127 National Hockey League (NHL) games, 122 people were injured by flying pucks. Major League Baseball fans are injured from foul balls at a rate of 35.1 injuries per million spectator visits. All of these seemingly “freakish” accidents lead to one big question: When spectators are injured at sporting events who is legally responsible?

When a fan chooses to attend a sporting event such as baseball, hockey or golf, that fan understands that balls or pucks often fly into the stands, sometimes hitting spectators. Under the legal theory known as Assumption of Risk, a person who willingly participates in an inherently dangerous activity assumes the risk of getting injured. Thus, an owner of a baseball field or baseball team can defend a personal injury lawsuit based on a fan being hit by a foul ball by arguing that the fan was aware of the possibility of getting hit and injured by a flying ball and chose to attend the game anyway. Furthermore, just in case a fan is unaware of the inherent risk of injury when attending a sporting event, most teams included disclaimer and assumption of risk statements on the back of event tickets.

Many state legislatures have passed laws that protect stadium owners from liability when fans are injured.  For example, the “Colorado Baseball Spectator Safety Act of 1993” gives stadiums a complete defense based on the assumption of risk to most spectator personal injury lawsuits.

Exceptions to Assumption of Risk Rule

While stadiums have a great deal of protection based on the assumption of risk defense, they are not completely protected. When injuries occur due to activities outside of the normal play of the game, the stadium may be liable. For instance, a Los Angeles King fan was hit in the head by a puck. However, the puck was thrown into the stands after the play had stopped. In this instance, the flying puck was not part of an activity that is an inherent part of a hockey game or that typically occurs during a hockey game. Being hit by a puck, under those circumstances, was not a risk that the fan had assumed. The fan won a $3 million settlement.

Other types of accidents

Fans are injured at sporting events, not just by flying balls or pucks. In some cases fans fall from stadium decks, fans are injured in fights, or fans slip and fall. These types of accidents are not inherent risks to attending the sporting event. Some of these accidents could happen anywhere. For example, a slip and fall accident will likely be evaluated as a run-of-the-mill premises liability case. When a fan falls from one level of a stadium to another or where a fan is injured in a fight with another fan, there arguably may be some stadium liability, but there will likely also be an issue of contributory negligence.

Fan fights and other risky fan behavior at sporting events are not unusual. Most stadiums serve alcohol and fights are often fueled by alcohol. Other incidents such as fans fall over railings occur due to the intoxication of those fans. Should stadiums assume a substantial part of the blame for fan fights or other irresponsible fan behavior that is fueled by alcohol? Stadiums should know that drinking will result in irresponsible, risky behavior.

When you hit the stands to watch your favorite team play, make sure you keep yourself in check and avoid fights, falls, or flying balls.