Motorcycle Accident Deaths in Texas in 2015 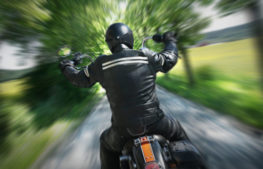 Motorcycles have long been a popular vehicle choice for many Americans, but they’ve also been a focal point for controversy over the years. Many states have seen helmet laws come and go throughout the last several decades, and issues involving safety and rider liberty have been ongoing. Throughout it all, there has been a steady increase in motorcycle ownership. Unfortunately, that has sometimes been accompanied by a high level of injuries and deaths for those who ride these vehicles – a fact that many members of the public seldom hear. For example, do you know how many people were killed due to motorcycle accidents in Texas in 2015?

To understand the true scope of motorcycle deaths in the Lone Star State, it is important to have a basic understanding of just how popular these vehicles are among the Texas population. According to Motorcycleroads.com, Texas ranks third in the nation for motorcycle registrations, lagging only behind California and Florida on that list. There were nearly 450,000 registered motorcycles in Texas in 2014. Not surprisingly, as motorcycle ownership has increased, so too has theft of the vehicles – with more than 3,400 of them stolen in 2015 alone.

That high rate of registration and theft indicates that motorcycle popularity in Texas continues to be as high as ever. The state’s laws for motorcycle use and its consistently fair weather makes it an ideal environment for riders who want to enjoy the thrills of the open road. Of course, such freedom and enjoyment can sometimes come at an extremely high cost.

Throughout the year 2015, a total of 459 motorcycle drivers and their passengers died in accidents on the state’s roads and highways. For anyone who’s counting, that’s more than 1 death for every 1,000 registered motorcycles in the state. According to statistics compiled by the state’s Department of Transportation, more than half of those who died in motorcycle accidents were not wearing protective safety helmets at the time of the accident.

As you might expect, there were even more injuries related to motorcycle accidents. In 2015, a total of 1,887 riders and passengers on motorcycles suffered injuries that were considered incapacitating in nature. Roughly half of those victims were riding without a helmet. An additional 3,324 drivers and passengers suffered non-capacitating injuries. Among those riders and passengers, more than half were using protective helmets when they crashed – a statistic that should serve as a reminder to everyone that helmets not only save lives but can also reduce the impact of many accidents. All totaled, there were more than 9,000 reported motorcycle accident injuries, possible injuries, and deaths on Texas roads in 2015.

The evidence has long shown that accidents on motorcycles often result in injuries that are far more severe than those suffered by drivers and passengers in cars – and for fairly obvious reasons. Unlike those who are riding in cars, motorcycle riders have little to protect them when a crash occurs. As a result, those who operate these motor vehicles can be at a higher rate of risk each and every time they take to the road. In fact, statistics compiled and evaluated by the Insurance Information Institute for the year 2013 suggest that, per mile of travel, motorcycle riders are roughly 26 times likelier to lose their lives in a crash than drivers and passengers in automobiles.

Federal studies indicate that riders who operate their motorcycles without helmets are at particular risk, with one report from the NHTSA concluding that more than 37% of all motorcycle deaths across the country involving drivers who were not wearing helmets could have been avoided if those riders had been using the proper protective gear. Obviously, that type of second-guessing can always be argued from both sides of the debate stage, but it stands to reason that more safety equipment should translate into fewer fatalities.

Many of the most common motorcycle injuries involve traumatic brain injuries, and there too helmet use offers clear benefits. According to studies, helmets have been judged to be 67% successful at protecting riders against serious brain injuries. While not foolproof, those helmets clearly provide the head with greater protection against impact with the road or other vehicles, and that can help to offer motorcycle riders a greater chance of surviving any crash.

Texas has tried to strike a balance between maximum freedom for riders and reasonable regulations that can help to protect motorcycle users and the public at large. Safety is a major concern in the state, and all matters related to motorcycle safety are managed by the state’s Department of Public Safety, under the auspices of the Motorcycle and ATV Safety Unit. The state’s rules mandate that drivers 21 or older participate in a training course for motorcycle operators or demonstrate that they have health insurance coverage that covers their use of a motorcycle if they want to enjoy the Texas helmet use exemption.

Despite the existence of that exemption, experts almost universally agree that the single greatest step that any motorcycle operator can take to protect himself and his passengers is the consistent use of a helmet. No matter how experienced a rider may be, there will always be the possibility that other drivers on the road make mistakes – and in the battle between a motorcycle and any car or truck, the motorcycle has almost no chance of coming out on top.

Of course, even with the greatest attention paid to safety concerns, accidents will still happen. Motorcycle operators will continue to die, and many more will suffer injuries in crashes across the state and around the nation. When that happens, the process of obtaining compensation for everything from injury-related damages to wrongful death awards can be challenging for everyone. If you or someone you know has suffered from injury related to a motorcycle accident, or if you’ve had a family member killed in a motorcycle crash, you need the help of a competent attorney to ensure that you receive the compensation to which you may be entitled.

Set your Author Custom HTML Tab Content on your Profile page
Contact us 24/7. Call or click now! 361.882.4357 or Request a call back Start Your Case Now
LIVE CHAT