Home Blog Motor Vehicle Accidents Motorists, Here’s What You Can Do to Help Prevent Motorcycle Accidents

Motorists, Here’s What You Can Do to Help Prevent Motorcycle Accidents 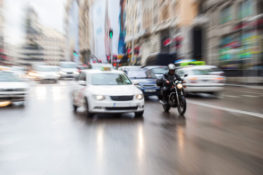 When we hear those now-familiar annual statistics about the number of automotive accidents, injuries, and deaths that take place each year on the nation’s roads and highways, it’s easy to focus on the cars and trucks involved in those crashes. And indeed, those vehicles do make up a sizable portion of accidents each year. There is another group of vehicles, though, that is also worth focusing on: motorcycles. Each year, many thousands of motorcycles are involved in crashes – often with severe consequences for the riders involved. As a motorist, you might not think that there is much that you can do to help prevent motorcycle accidents, but the truth is that you can have a tremendous impact on those riders’ safety.

The Problem by the Numbers:

Statistics reveal that more than 4,500 people died due to motorcycle accidents just two years ago. In addition, 92,000 riders suffered injuries that same year. Comparisons between motorcycle and automobile accidents reveal that cyclists are far more likely to suffer a fatality in a crash than people inside cars and trucks.

Many of those who died and suffered serious injuries had no protective headgear on when the crash occurred – primarily due to differences in how the various states deal with helmet laws. And yet studies confirm that helmets are proven to be about 37% effective when it comes to preventing crash deaths for motorcyclists. Even more important, they are 67% successful at helping riders to avoid traumatic brain injuries.

The problem has become so bad that estimates indicate that a motorcyclist is 35 times as likely to be involved in a fatal crash than passenger vehicles. To drive that point home, statistics also reveal that motorcycles are involved in eleven percent of all motor vehicle accidents on the nation’s roads and highways. And while it would be easy to attribute that to the growth in the number of vehicles on the road over the last several decades, another sad fact cannot be disputed: the number of motorcyclist fatalities each year has far outpaced the growth in the number of motorcycle registrations.

There are many obvious reasons for these accidents and deaths. The NHTSA reports that more than a third (35%) of all riders who die in motorcycle accidents are speeding at the time of the accident. Riders who are more than 40 years old makeup about 75% of those deaths as well – and about 22% of fatality victims don’t have valid licenses at the time of death.

Despite those statistics, there is much that you as a motorist can do to help minimize the risk to these motorcyclists. Many of these solutions will be familiar, of course, since they involve the same type of safe driving practices that you should be adhering to every time you’re on the road. However, the increased vulnerability of motorcyclists makes many of these solutions even more relevant if you want to help save lives.

Get the Help You Need

Obviously, you cannot prevent everything that could place motorcyclists at risk. You can, however, take the necessary steps to ensure that you’re not contributing to an increase in the risk those riders already face. The good news is that these solutions are easy to implement, and should already be a part of your safe driving routine. And remember, if you are involved in an accident of any kind, always rely on the advice of an experienced personal injury attorney in Texas to help protect your rights and interests.