Posted by Kristopher Rodriguez on April 6, 2017 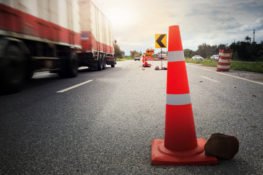 The sight of orange cones and caution signs signaling road construction on roads often makes commuters grumble. Work zones signal congestion and delays. However, the alternative is driving on broken-down roads – an unappealing choice for many. Texas is having a difficult time keeping up with the maintenance of the state’s roadways because of the increase in truck travel in the state. The heavy truck traffic and roads in disrepair pose threats to motorists’ safety.

Many of the roads in Texas have paid the price for the economic boom resulting from oil drilling projects such as the one in Eagle Ford Shale. According to the Road Information Report issued by the Washington, DC-based research group TRIP, 18 percent of Texas’ roads are in poor condition and an additional 27 percent were rated in mediocre condition.

Transportation experts point to the increased heavy truck traffic on the state’s roads that accompanied the expansion of oil drilling in Texas as the primary cause of road deterioration. The Texas Department of Transportation estimated as early as 2011 in its annual report that the road conditions in five of the 10 counties with the most growth in oil field traffic would become “critical,” presenting threats to motorists’ safety and requiring repair.

Crumbling infrastructure causes problems for all drivers. Not only are roads more congested, but they are less safe to travel on because they are in disrepair. Correspondingly, traffic accidents have increased. The Texas DOT issued a report examining traffic accident fatalities in the 23 counties surrounding the Eagle Ford Shale project and found that auto accident deaths increased by 40 percent.

The report noted that approximately two-thirds of traffic accidents involved male drivers and occurred between the hours of 4 p.m. and 6 p.m. These statistics suggest that many accidents correspond to shift changes for oil field workers and that fatigued oil field workers are involved in accidents.

Speak with an attorney

Driving in Texas can be risky, no matter how many precautions a person takes. Poor roads and large trucks can make even short trips dangerous. If you have been injured in an auto accident, talk to a seasoned auto accident attorney with a proven record of successfully handling these complex cases.

Contact the Herrman & Herrman law office at 361-882-4357 to schedule your free consultation today!