Safety at a Stadium: Managing Risk 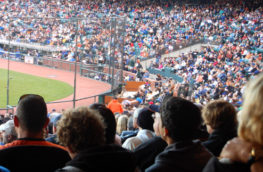 Stadiums have always presented unique safety concerns, many of which have been addressed only in the wake of accidents or other tragedies. Some have referred to this phenomenon of increasing safety regulations as “legislating by catastrophe” as a way to highlight the fact that many safety procedures and risk mitigation designs only come about in response to serious injuries or fatalities. Despite increased attention to safety at the nation’s stadiums, however, risks remain. That makes it all the more important for stadium visitors to understand the dangers and know how to effectively mitigate the risk for themselves and their loved ones.

Fans gather in stadiums across the country and around the world to watch their favorite sports teams, hear their favorite musicians, and participate in assorted other events. It almost goes without saying that such large gatherings of bodies are bound to come with an increased risk – and yet few spectators consider these things before they enter the venues. Consider these facts:

According to foulballz.com, about 28 foul balls end up being hit into the stands at every Major League Baseball game. Given that the league’s schedule sees each of its 30 teams playing 162 games – a total of 2,430 games during the regular season – that adds up to tens of thousands of foul balls entering the spectator sections each season. It’s no wonder Bloomberg reported in 2014 that roughly 1,750 fans are injured by foul balls every year.

Hockey-related injuries are another concern. In one study in 2000, The Puck Stops Here: Spectator Injuries, A real Risk Watching Hockey Games, the researcher found that of 127 hockey games reviewed, 122 fans were injured when they were struck by wayward pucks. Nearly 75% of them required stitches, and almost half required emergency vehicles to transport them to the hospital for treatment. Injuries to the face and head made up the bulk of these incidents.

American collegiate and professional football can be equally dangerous, but for different reasons. Reports of fans falling and suffering injuries have often been related to alcohol consumption. Some have been the result of defective handrails, wet stairs, and other structural concerns. By and large, however, most football stadium injuries have little to do with what happens on the field.

Falls have caused stadium owners to modify structures on many different occasions. For example, after a fan died from a 20-foot fall in Arlington’s Globe Life Park in 2011, the Texas Rangers altered the railings to make them eight inches taller. 2011 saw another Arlington stadium accident – this time at Cowboys Stadium, where six people were hurt when ice and snow fell down on them from the stadium’s dome roof.

Accidents happen, of course, and most spectators understand that flying pucks, balls, and splintered bats are risks that they may face when they enter any stadium environment. Most people, however, do not enter such venues with the intent of being victimized by violence or other criminal activity. Sadly, though, it does happen – and far too frequently.

Fan violence has many causes. Intoxication, a lack of effective crowd control, traffic congestion, ticket scalping, and other factors can all help to create conditions in which stadium violence erupts. Of course, the main cause has to do with the strong passions sporting contests evoke among spectators, which helps to explain why spectator violence in stadiums has been a problem since the time of the ancient Greeks. And though some have tried to attribute the perceived increase in fan violence to some imagined sense that American society as a whole is now more violent, statistics from the FBI suggest that such blame is misplaced.

Who’s Responsible for Your Safety?

Often times, fans injured at various stadium events automatically assume that there must be someone they can sue. After all, they reason, why wouldn’t the team or stadium owner be responsible for injuries occurring in their venue? Sadly, that reasoning is not as sound as common sense might suggest. The fact is that, with few exceptions, most stadium spectators assume personal liability for their own well-being when they purchase their tickets.

The only way around this standard is for the plaintiff in any case to provide evidence that demonstrates that the stadium’s owners somehow failed to meet established customs and standards related to providing a safe environment for fans. Many stadiums and teams also place liability disclaimers on tickets, notifying fans that they enter at their own risk.

Protecting Yourself and your Family

Since you are ultimately responsible for your own safety within a stadium, you need to know how to protect yourself and loved ones from harm.