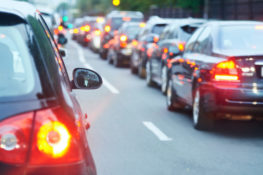 San Antonio is one of the fastest growing cities in the United States. An additional one million people are forecast to move to Bexar County in the next 20 years, adding to traffic congestion and making transportation planning critically important to avoid gridlock.

The current discussion about the future of San Antonio’s transportation system is prompted in part by the Texas Department of Transportation’s proposal for a $1 billion project to expand Loop 1604 to a 10-lane roadway between Bandera Road and Interstate 35.

While evaluating whether to expand San Antonio highways to accommodate more traffic or increase access to public transit, a recent article by the Rivard Report, a San Antonio news outlet, says:

In short, the theory is if you build wider roads, then more traffic and more traffic accidents will inevitably follow. That has inspired efforts by San Antonio leaders to rethink the approach to dealing with traffic congestion.

As part of reimagining San Antonio’s transportation system, San Antonio city leaders are backing an expansion of VIA, San Antonio’s public bus system, through a November 2020 ballot initiative that would dedicate a one-eighth-cent sales tax to VIA and the VIA Reimagined expansion plan.

What is San Antonio’s ‘VIA Reimagined’ Public Transit Plan?

Instead of building 10-lane highways, the VIA Reimagined plan is to develop more frequent bus service, a rapid transit network that bypasses traffic in dedicated lanes, and innovative solutions built around smart transit technology. Since 2018, VIA has increased bus frequency on key routes, rebuilt 1,000 bus shelters and debuted a trip-planning and payment app, all of which have been followed by growth in ridership.

VIA Reimagined is a 10-year plan based on VIA’s Vision 2040 Long-Range Plan. According to VIA and a previous Rivard Report explanation, a rapid transit network will consist of a network of dedicated lanes that allow modern, high-capacity buses to bypass traffic backups on routes between the region’s major communities and employment centers.

The Rivard Report said in March: “VIA Reimagined is the transformative plan needed to accommodate unprecedented growth in the region. It provides a blueprint that doesn’t aim to eliminate traffic but envisions a transportation network with the freedom to move outside of traffic.”

“For more than four decades, San Antonio has dedicated only one-half-cent sales tax for public transportation, while other Texas cities have applied the maximum 1-cent sales tax approved by the Texas Legislature,” the Rivard Report says in its argument for November’s sales tax initiative. “Those cities now have mass transit systems far superior to VIA, and Dallas and Houston, in particular, have received hundreds of millions of dollars in federal matching funds.”

The tax currently goes to the Edwards Aquifer Protection Program and the buildout of the city’s linear hike and bike trails, which the Rivard Report says are nearing completion and can be funded via other sources in their final years.

VIA officials say the Bexar County region will grow by 1.6 million residents by 2040, which will cause a 35% increase in traffic congestion and add 41 minutes to the average commute.

Meanwhile, 139 people were killed and 5,277 were injured in crashes in San Antonio in 2018, according to the Texas Department of Transportation (TxDOT). In Bexar County in 2018, there were 49,191 motor vehicle accidents, with 180 fatalities and 6,139 injuries, according to TxDOT.

Here’s a count of traffic accidents in San Antonio and Bexar County from TxDOT for 2018 and the prior five years:

While we can be thankful for the dip in the number of accidents in the last couple of years, it’s clear that the trend is upward.

There are many types and causes of car accidents. Studies of car accident trends have cited several factors including the economy and the age of the population. The effect of the economy is demonstrated by the dip in accidents during the 2008 recession when fewer cars and trucks were on the road. Younger drivers are less experienced and more likely to take risks, as a June 2018 study suggests.

Meanwhile, a 2018 analysis by the American Public Transportation Association and the Vision Zero Network, which seeks to eliminate all traffic fatalities and severe injuries nationwide, concluded that using public transit is 10 times safer than traveling by private vehicle and using commuter/intercity railroads is 18 times safer.

According to National Safety Council’s Safety + Health magazine, researchers found that metro areas where residents take more than 40 bus or train trips a year have about much lower fatality rates than areas where residents average fewer than 20 trips a year. One of the ways public transit can help reduce traffic-related fatalities is by decreasing the number of high-risk drivers on the roads, it says.

Drivers who drive carelessly and cause car, truck, motorcycle, pedestrian and bicycle accidents in San Antonio can be held accountable for the harm they inflict upon others. The San Antonio accident attorneys of Herrman & Herrman can help you seek compensation for your medical bills, lost income, pain and suffering, and more if you have been injured or lost a loved one in an accident that was someone else’s fault.

Contact us in our San Antonio office for a free, no-obligation legal consultation today.