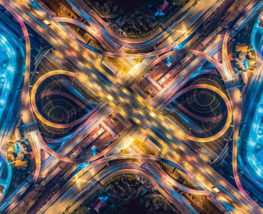 San Antonio motorists who have endured the traffic congestion where Harry Wurzbach Road goes under Austin Highway may look forward to a redesign meant to eliminate dangerous turns and frequent backups at the freeway interchange.

The newspaper describes the existing intersection as requiring drivers to execute “the Wurzbach Workaround” by cutting through either an H-E-B or Lowe’s parking lot to avoid backups and get access to the Austin Highway. The redesign will eliminate the lengthy stoplight, and a raised median is meant to prevent collisions.

“(B)y using the SPUI design over a traditional multi-lane interchange requiring flyovers, such as at Loop 1604 and U.S. 281, the new project will save an estimated $5 million to $7 million and a year of time,” the Express News says. “The city promises that all the area’s businesses will remain accessible during the construction.”

What is a Single Point Urban Interchange (SPUI) Intersection?

The San Antonio transportation blog On The Move explains that an SPUI connects a freeway to a surface street with a single traffic signal that allows opposing left turns to be conducted simultaneously. That eliminates multiple traffic signal phases and traffic backups as cars wait for a turn arrow. It also eliminates the straight-through movement between the freeway ramps. A driver coming off the freeway must turn either left or right onto the cross street.

The author of that post, urban and regional planner Brian Purcell, fully explains and illustrates the project at Harry Wurzbach and Austin Highway at his The Texas Highway Man blog. “The new interchange will allow traffic to more easily and intuitively get from Harry Wurzbach to Austin Highway and vice-versa, reducing congestion at the Eisenhauer intersections and eliminating cut-through traffic in adjacent parking lots.”

The Texas Department of Transportation (TxDOT) explains and illustrates the SPUI concept in a fact sheet. It says a SPUI enhances safety and mobility by reducing potential crash points at intersections and by allowing more cars to move through an intersection. This means a reduction in both delay and travel time.

At a SPUI, according to TxDOT:

Do Most Car Accidents Happen at Intersections in Texas?

The TxDOT recently redesigned and reopened the intersection at Bandera Road (Texas 16) and Loop 1604 in San Antonio. The Texas Highway Man explains that project created another intersection design likely new to many drivers, called a Displaced Left Turn (DLT) intersection, or a Continuous Flow intersection. This is the first DLT in San Antonio, he says.

In the study’s conclusion, the NHTSA refers to driving too fast for conditions and aggressive driving as contributors to intersection accidents.

If you or a loved one has been injured in a collision someone else caused at a San Antonio intersection, the car accident attorneys of Herrman & Herrman may be able to help you. Under Texas law, you have two years from the date of an accident to file a personal injury claim for compensation to cover your losses in the accident, such as medical care costs and lost income.

Before accepting an insurance payment for injuries suffered in a car accident occurring at an intersection in Bexar County, let a knowledgeable attorney review your case and any settlement offers made to you during a free legal consultation. We may be able to do better for you. Call us today at (361) 882-4357, chat with us live 24/7, or fill out our online contact form to set up an appointment.