Home Blog Personal Injury Slip and Fall Accident? 3 Reasons You May Not Be at Fault

Slip and Fall Accident? 3 Reasons You May Not Be at Fault 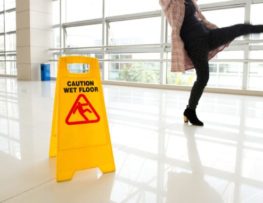 If you’ve suffered a slip and fall accident, there’s a good chance that your first reaction to the incident was some level of embarrassment. Many of us are uncomfortable when we fall in public since those kinds of accidents tend to draw attention to us that we may not want. When that fall happens in stores, parking lots, restaurants, and other privately-owned areas, that discomfort can be magnified when store owners or others suggest that you are somehow at fault for the incident. Certain comments and questions might even have you wondering whether you should have been able to avoid falling altogether. However, there are three simple things that should indicate to you that you may not actually bear any fault for your slip and fall accident.

Ask yourself these three questions:

Was the danger a new problem that no one could have known about, or something that had been there for some time? It can be more difficult to prove a property owner’s liability in instances where the danger was so new that he could not be reasonable expected to have known of its existence. If the hazard has obviously existed for some time, however, then it may be easier to prove that the owner neglected to eliminate it.

Was there any effort on the part of the property owner to warn others about the danger? This question gets right to the heart of negligence in many cases, because it may indicate that the property owner knew of the danger and was so careless that he simply neglected to take the minimum action necessary to protect those who might lawfully enter the premises.

Take, for example, a case where a known pipe leak was causing water to leak onto the floor in a section of a restaurant. An owner who knew of that danger and took no affirmative action to post warning signs or cordon off the area could be found liable for injuries suffered by anyone who happened to fall in that area.

How obvious was the danger? This is important too, because you have some responsibility to be aware of obvious dangers and protect yourself. So, if there was a clear obstruction in your path and you were too distracted to see it, then you may be at fault for your fall. For example, if you were distracted by your cell phone and walked over an obstruction on the floor, you may be found to be at least partially responsible for your own fall.

Of course, all of this hinges on your lawful right to access the area in the first place. Obviously, you would have a hard time proving that someone else was at fault in cases where you unlawfully entered someone’s premises and exposed yourself to danger – as would be the case if you broke into a closed construction site, for example. When you do have a right to access the premises, however, you may be able to recover damages. In Texas injuries, the state’s reliance on the 51 percent Bar Rule enables you to recover for accidents in which you were not more than 50 percent responsible for your own injuries.

According to estimates published by the National Floor Safety Institute, falls are the leading cause of injuries that result in emergency room visits – sending more than 8 million patients to the hospital each year. Slip and falls account for more than a million of those incidents. These accidents often result in fractures and other injuries, and are the primary cause for worker’s compensation complaints.

How dangerous are falls? According to the Centers for Disease Control and Prevention, roughly twenty percent of falls involving the elderly result in serious injuries like head trauma or broken bones. Falls are responsible for at least 95% of fractured hips. Slip and falls can result in injury at any age, and can even result in death in some circumstances. In fact, slip and falls are responsible for about fifteen percent of all deaths in the workplace, according to the United States Department of Labor, and cost businesses about $4 billion in losses each year. Arbill has reported that roughly 19,565 people die as the result of falls each year.

How it Affects You

As interesting and important as those statistics are, however, the real impact of any slip and fall is always felt most keenly by the fall victim – in this case, you. You’re the person who has to deal with the pain and suffering resulting from any injuries you experience as a result of your fall. You are the one who has to manage the medical bills for treatment and endure the loss of income when you miss work. In some instances, you may even have to face a loss of employment due to disability. None of these are minor concerns.

That’s why it is important to think about who was truly at fault in your accident. Those questions and comments that you might have heard after your fall were designed to accomplish several things:

Someone wants you to question your own level of responsibility. This is typically done to cause you to second-guess yourself or admit to a fault – even if you did nothing wrong.

Insurance adjusters often use tactics like that to dissuade you from seeking compensation by leaving you with the impression that your cause is hopeless.

By raising issues that involve legal questions of fault and liability, defense attorneys and insurance company personnel will attempt to demonstrate that their legal resources put them in a superior position when it comes to any potential court case.

Don’t Slip or Fall for Those Tactics!

Never allow a property owner, insurance adjuster, or attorney to alter the facts of the case to suggest that you caused your own injury. Refuse to answer leading questions that might indicate that you were at fault, and seek legal counsel as soon as possible. Let a competent personal injury attorney go over the facts of the case with you to determine who was really at fault so that your right to compensation can be pursued. Before you fall for those tactics, get legal representation to secure your rights.