SUVs Deadly For Drivers of Passenger Vehicles in Collisions 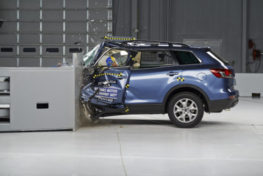 In 1978, the National Highway Traffic Safety Administration developed a five-star rating system to let consumers know how different vehicles fared in frontal collisions. In 1997, the NHTSA incorporated side-impact collisions into its rating system and added rollover tendencies to the safety assessment in 2001. Many consumers rely on these safety ratings to help them make decisions about which vehicles to purchase. However, new research indicates that safety ratings may give a false sense of security. A study released by the University of Buffalo in May 2013 showed that when sport utility vehicles collide with cars, the occupants in the SUVs are more likely to survive – no matter the safety ratings of the cars.

Researchers attributed their findings to the mechanics involved in a head-on collision. When an SUV hits a smaller vehicle head-on, the SUV usually goes up over the hood of the smaller passenger vehicle because the bumpers on the two automobiles do not match up. The SUV ends up crushing the occupants of the smaller car in such accidents.

SUVs Are Not Guaranteed Safe

Safety experts acknowledged that vehicle type may mean more than safety ratings for surviving head-on collisions, but they cautioned that choosing an SUV does not automatically guarantee that a driver will be safe. SUVs are more prone to rollover accidents, which are often fatal. Advances in electronic stability control have reduced the frequency of SUV rollovers, but they are still more prone to such accidents than passenger vehicles are.

Speak With an Attorney

No matter how hard a driver tries to be safe, he or she cannot guarantee that others are taking as many safety precautions. When drivers do not use appropriate care behind the wheel, they cause auto accidents. If you have been injured in an accident caused by another driver’s negligence, seek the assistance of an experienced auto accident attorney who can help you recover the money you need for your bills and property loss.