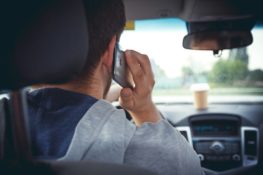 The Eyes of Texas are straying from the road ahead and getting far too many people killed and injured in distracted driving accidents.

Distracted driving is any activity that takes your attention away from driving. Distractions while driving can include anything from texting and talking on a cell phone to eating and drinking, putting on makeup, shaving, reading, programming a navigation system, watching a video and adjusting the radio or an iPod.

When a driver takes their eyes off of the road for 5 seconds at 55 mph, it’s like driving the length of an entire football field with their eyes closed, the National Highway Traffic Safety Administration (NHTSA) says.

How Many People Die from Distracted Driving?

Some of the local distracted driving statistics from 2017 are just as disturbing. Consider the facts from Texas counties where Herrman & Herrman has offices and in other large urban areas of Texas:

*Numbers are from Texas Peace Officer’s Crash Reports (CR-3) received and processed by the TX DOT as of April 20, 2018.

Does Our State Do Enough to Prevent Distracted Driving?

Texas took a step toward curbing distracted driving when it adopted a ban on reading, writing or sending electronic messages while driving that went into effect on Sept. 1, 2017. A first violation of the law is punishable by a fine up to $99, and subsequent offenses carry a fine up to $200. Local ordinances may be more restrictive.

Does Texas do enough to prevent distracted driving? A June 2019 news release from TxDOT says “The statewide texting-while-driving ban could be helping a little.”

According to the news release, recent data show that “the number of crashes involving distracted driving in Texas decreased by 6 percent when comparing the 12-month periods before and after the statewide texting-while-driving ban took effect on Sept. 1, 2017.”

The June news release was written to announce It Can Wait, a new public awareness campaign kicking off June 4 in collaboration with AT&T to educate Texans about the dangers of driving while distracted. Campaign activities include a 12-city, virtual reality experience tour, social media, and audio and video/television PSAs.

Does Texas Need a Universal Ban on Phones Behind the Wheel?

A study published in February 2018 in the Journal of Adolescent Health suggests that a universal ban on hand-held cell phone use is more effective than just banning texting while driving or aiming prohibitions at teenage drivers. The study’s authors said universal texting bans have not fully discouraged teens from texting while driving. Bans limited to just young drivers were not effective in reducing either hand-held conversations or texting.

Even with laws in place, about one-third of teen drivers still talk on the phone and text while driving, the Nationwide Children’s Hospital researchers found.

And, as drivers raised with cell phones age, their reliance on video screens is apparently becoming a part of their driving habit. A study published in JAMA Pediatrics in May 2019 says millennials (born from 1981 to 1996, and averaging age 33 at the time of the survey) who are parents are much more likely than older parents (44-year-olds, on average) to read or write texts while behind the wheel.

Here some ideas to help you avoid distracted driving, which are adapted from recommendations by the AAA Auto Club, Geico insurance and Travelers insurance:

Laws act as deterrents but, in the end, we are all responsible for our own actions. The best way to avoid a distracted driving accident is to keep your eyes on the road ahead and to check your mirrors as you drive. Don’t drive distracted, and don’t fail to see someone who is about to cause an accident because they are distracted.