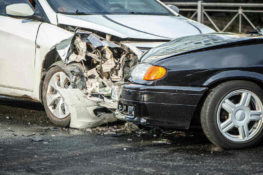 The tragic death of a toddler in a head-on collision in San Antonio in November reminds us of the fragility of life and of steps we should take to keep children safe on South Texas roads this holiday season.

Three-year-old Rogelio Morales Jr. died Nov. 27 when the sedan he was riding in on San Antonio’s Southeast side was hit head-on by a wrong-way driver, according to news reports. The 8 p.m. accident also killed 37-year-old Aracelly Avalos-Ramirez, who crashed her silver SUV head-on into the car that Rogelio’s aunt was driving. The unidentified aunt was taken to an area hospital with non-life-threatening injuries, KSAT reported.

Witnesses told police the driver of the SUV was traveling the wrong way against traffic and had dodged other vehicles multiple times shortly before the collision in the 3700 block of East Southcross Boulevard near Pecan Valley Drive. Wrong-way drivers pose a risk to everyone else on the road and should be held accountable when they cause fatal head-on collisions.

After the loss of a loved one caused by others’ carelessness or negligence, a family deserves trusted legal guidance to help move forward with their lives without the burden of medical bills and funeral expenses. Herman & Herrman offers compassionate and trusted guidance to families facing this difficult situation. Call to find out how our San Antonio attorneys may assist you.

Texas Law Says Toddler Should Have Been in Car Seat

Police said the toddler wasn’t in a car seat at the time of the crash but was wearing a seatbelt, according to News 4 San Antonio.

The Texas Child Car Seat Laws require that children who are younger than 8 years old or shorter than 57 inches (4 feet, 9 inches) be secured in a child safety seat whenever they ride in a motor vehicle. Children age 2 to 4 may sit in a front-facing car seat installed in the back seat. Children younger than 2 must always be in a rear-facing child car seat, preferably in the back seat.

Older children may sit on a booster seat and, once they outgrow it, can use the adult lap / shoulder safety belt if it fits them properly according to the vehicle manufacturer’s instructions.

The Texas Department of Public Safety says children are better protected the longer they can stay in each phase of progressing through car and booster seats without meeting the seat’s maximum age / weight / height limits. Until age 13, all children should ride properly restrained in the back seat.

Failure to properly restrain a child in Texas can result in a fine. When an unrestrained child is injured or killed in a car accident, police might consider whether the lack of a car seat or seatbelt contributed to the child’s death and whether criminal charges are warranted. Either driver in such an accident might face a civil claim, as well.

Under civil law in Texas, a person who has been injured in a car accident caused by a negligent wrong-way driver may seek compensation for their losses. This compensation typically comes from the auto liability insurance of the at-fault driver. A claim will go to the at-fault driver’s insurer, which will consider what has happened and the extent of the claimant’s injuries and losses. The insurance company may offer a settlement or deny the claim.

If we are handling the case, our attorneys at Herrmann & Herrman, P.L.L.C. in San Antonio will present evidence to the insurance company and negotiate with the insurer for proper compensation. If an appropriate settlement cannot be reached, we will consult with you before filing a lawsuit and taking the case to court.

However, if your child was riding with someone else and was injured or killed in a crash – or died because they were not properly restrained by that driver, we would evaluate whether you  have a claim against that negligent driver, as well.

Car accident claims seek insurance money for losses, such as medical bills or funeral and burial expenses after a fatal accident. While there may be compensation in some cases for pain and suffering that includes grief and possibly punitive damages for egregious behavior, a car accident lawsuit primarily seeks to prevent financial injury to the innocent victim(s) of the accident.

For decades, the personal injury and wrongful death attorneys of Herrman & Herrman have assisted families in South Texas at the most difficult times in their lives. We know that after a fatal collision involving the death of a child, the families on both sides are shattered. While no amount of money will make up for the preventable death of a child, Texas law protects the innocent when they are visited by tragedy through no fault of their own.

Speak to a San Antonio car accident lawyer from Herrman & Herrman if you have been injured or lost a loved one in a car accident that someone else caused. We can review the accident and discuss your legal options with you at no charge. We can investigate your case, present a solid claim to insurers and negotiate aggressively to obtain proper compensation to you.

Most car accident cases are settled out of court. And, in the case of a child’s death, few insurers want the publicity of a public trial over the insurer’s refusal to do what is right for the grieving parents. If we cannot recover money for you, we will not charge you for our services.

In San Antonio or another Bexar County community, contact Herrman & Herrman to learn about the experienced legal representation you need after a tragic accident. Our San Antonio staff is bilingual, capable of speaking to clients in both English and Spanish. Call us at (361) 882-4357 or contact us online now to set up a free and confidential consultation.