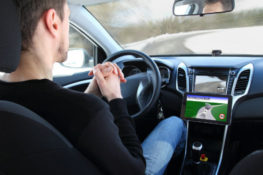 The North American International Auto Show (NAIAS) showcases some awesome new developments in new car technology, including safety innovations. The show, which took place January 11th through 24th in Detroit, point to the future of automobiles and is a reminder that the way people travel will likely change significantly in the next 10 years.

Detroit Auto Show Recap and the Future of Car Safety

The Detroit auto show provided insight into what is to come in the future regarding automobiles. In the future, technology in cars may advance to the point that smart cars might be able to turn on the heat in homes before we arrive, or inform us that we need to pick up groceries. They also may be much safer than we ever imagined. After all, it was only in the 1950s that car manufacturers began offering seatbelts. Who knows, in 10 years’ time or less, vehicles may be so smart that they avoid traffic accidents altogether, eliminating auto-related deaths and injuries and providing people with a safer way than ever before of getting from one place to the next.

Let us not forget the advances in energy as well – cars are being developed today using renewable sources of energy rather than gas, with the end goal of reducing our dependence on fossil fuels.

At Herrman & Herrman, we are interested in the innovative safety technology being introduced in new cars, which will ultimately make our communities safer. To increase awareness about technological innovations and to increase safe driving, and to help those in our community, we sponsor the Innovation Scholarship. The winners of our 2015 Innovation Scholarship have been announced!

For the time being, self-driving cars are a futuristic exhibit at auto shows. Do not expect these vehicles to be commercially available in the next year or two. That being said, all error behind the wheel continues – for the most part – to be human. If you are involved in an accident caused by a negligent driver in Corpus Christi or anywhere in the Rio Grande Valley in Texas, the experienced car accident attorneys at Herrman & Herrman are ready to help you.