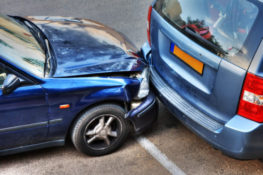 When most people think about Texas automobile accidents, their first thoughts seldom involve parking lot fender benders. After all, collisions that occur out on the state’s roads and highways receive far more media coverage and typically include all of the elements needed for memorable drama: vehicles traveling at a relatively high rate of speed, crashes that can do a tremendous amount of damage, and spectacular impacts that can cause severe injury and even death. Moreover, the sheer volume of accidents that occur each year help this type of accident to remain at the forefront of public consciousness.

Parking lot accidents seem almost tame when compared to those roadway incidents. Vehicles tend to be moving much slower than they would out on the open road, collisions rarely have the force of impact seen in other types of vehicular accidents, and few incidents ever receive any media attention. Even when drivers and passengers are injured in parking lot crashes, those collisions remain of little concern to most of society. That has led to a number of misconceptions when it comes to crashes of this nature and the injuries that they can cause. To help counter those misconceptions, it’s important to understand how common these incidents really are and learn the truth about three Texas parking lot accident injury myths.

It Happens More than You Know

The Insurance Institute for Highway Safety (IIHS) conducted a case study of 509 vehicles that were involved in collisions that resulted in damage claims and found that 14% of those accidents took place in parking lots. Other estimates, including Independent Insurance Agents and Brokers Association results published by Bottom Line Inc., indicate that the total annual percentage of vehicular crashes that take place in parking lots is as high as 20%.

According to auto insurer Progressive, some 25% of the claims it processes after the annual “Black Friday” holiday shopping sales each year are related to accidents that occur in parking lots. In addition, a 2010 Bureau of Labor Statistics (BLS) report indicated that, of the 277 pedestrians who were hit by vehicles at work that year, 126 were struck in parking lots.

It’s important to put all of this into context, of course. Each year, there are more than 5 million vehicular accidents around the country, resulting in roughly 40,000 deaths and more than 2 million injuries. Last year, in the state of Texas, more than 17,000 people sustained serious injuries in vehicular crashes. On average, there was one reported crash taking place about every sixty-one seconds. If that 20% estimate for parking lot collisions is even close to being accurate, that would suggest that parking lot crashes in Texas occur about once every five minutes. Obviously, that should be a major concern for drivers in the state.

Many experts agree that a large number of parking lot accidents go unreported. In some cases, those accidents involve so-called hit and run – where a driver hits another vehicle and simply drives away, leaving no note or contact information for his victim. In other instances, drivers are fearful that reporting minor incidents might cause their insurance rates to increase. When injuries are sustained, however, there are three other common myths that can cause drivers to fail to take action when they are struck in parking lots:

Myth #1: It’s a parking lot; both parties must be at fault.

The Truth: Some people who suffer injuries in parking lots simply assume that they can’t recover damages because they are partly responsible for the accident. While it is true that some share of the fault may lie with both parties to a parking lot collision, that does not mean that the fault will invariably be 50/50. Depending on the circumstances, the other driver may be mostly at fault, and that would mean that you might be eligible to receive compensation of some kind.

Myth #2: Collisions can’t cause serious injury at such low speeds.

The Truth: Injuries can occur at virtually any speed. In fact, the actual speed at which the vehicles are moving is but one of many factors that determine whether a person suffers an injury or not. Some medical experts like to illustrate this fact by pointing to comparable changes in speed that occur when people experience falls.

Thus, a change in speed of 15 miles per hour (from 15 mph to 0 mph at the moment of collision) may not have an impact on the cars involved in the crash, but the human body is not comprised of the same materials used in cars. For us, that change in speed is comparable to falling more than seven feet from a ladder – something that can result in broken bones or other tissue damage. Clearly, these “low-speed collisions” can and do result in injuries, and juries know it.

Myth #3: Insurance can handle the matter; you won’t need an attorney.

The Truth: Look, you might get lucky. You might, indeed, run across an insurance company claims adjustor who feels so sympathetic to your cause that he or she ignores the demands of the job and actively works to help you secure the compensation you are due. However, that’s not something on which you should stake your financial well being.

The fact is that insurance company personnel are employed for one reason only: to make money for their companies and for its shareholders. To do that, they have to limit the amount of compensation that they pay out wherever possible – and they have teams of lawyers on staff to help them accomplish that goal.

To counter the legal might the insurer will bring against you during any attempt at recovery, you need legal assistance of your own. If you’ve been injured as the result of a collision in a parking lot anywhere in the state of Texas, you do have options available to you. To protect those options and pursue your legal right to seek recovery for any damages you’ve endured, you need to seek a consultation with an experienced personal injury attorney. So, ignore the parking lot accident myths and get the legal help you need today.