What to Do After a Work Injury 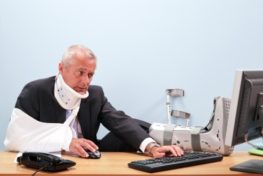 Every year, several million workers across the United States suffer some sort of injury or illness at work. Despite decades of governmental regulations and monitoring of the workplace to improve safety, accidents still happen and workers still get hurt. For some, the injuries are minor and recovery occurs quickly. For others, more serious injuries often result in permanent disability and an inability to ever work again. Whenever injury strikes, workers need to understand how to respond to ensure that they don’t suffer any more than they have to. The key to accomplishing that goal is to know what to do after a work injury occurs.

How bad is the problem?

According to the Bureau of Labor Statistics, roughly 3.7 million American workers from both the public and private sectors experienced job-related injuries and illness in 2014. Of those, more than 1.1 million ended up missing some time away from their jobs during recovery. Just three years prior, nearly 3 million workers ended up seeking treatment in emergency rooms as a result of workplace accidents and illness. While the number of injured workers in 2014 was almost 54,000 fewer than the previous year, there is almost universal agreement that far too many U.S. workers continue to be hurt on the job.

Occupational Health and Safety has reported that a UC Davis researcher studied the costs associated with the nation’s workplace injuries and illnesses and estimated it to be around $250 billion a year. So, while the nation as a whole has seen a decline in the number of job-related injuries over the last decade, it has seen a simultaneous increase in the financial toll associated with the injuries that still occur – some $33 billion more than a previous study conducted in 1992.

Those costs are an important factor for any injured worker to take into consideration. While most official studies examine the cost to business and the economy as a whole, the human part of the equation cannot be ignored. Injured workers often miss time from work. Many require medical care or hospitalization, as well as physical therapy to recover from their injuries. Some are injured so severely that they can never again work in the same field – if they are able to work at all.

Medical costs, lost wages, and the possibility of a diminished capacity for work in the future make it all the more important that any injured worker know how to respond when an accident occurs.

How to Respond To an Injury

There is a right way and a wrong way to respond to any workplace accident and injury. The wrong thing to do is to ignore pain and rely on the hope that you’re not seriously injured. The longer you wait to respond to an accident, the harder it will be to ensure that your interests are protected. So, above all else, react quickly. The following steps can help:

If you live in Texas, there are some specific steps that you need to take as well:

In every jurisdiction, you need to take steps to protect yourself and ensure that you don’t do anything that might cause medical coverage or future compensation awards to be denied. For example, if medical attention and ongoing treatment has been recommended by a physician, be sure to attend all appointments and treatment sessions – no matter how you feel. A failure to do so could be used against you in later proceedings.

Above all else, do not allow problems to linger. Injuries need to be treated properly. Claims need to be filed in a timely manner. Doctor’s instructions need to be carried out as ordered. And if a worker’s compensation claim ends up being denied, you need to pursue dispute resolution as soon as possible. Never delay.

Injuries can be traumatic no matter when or where they occur. When they take place in the workplace, however, they can prove even more destructive – costing the injured worker lost wages, stress, and even long-term suffering. By knowing your rights and the proper steps to take in the aftermath of an accident, you can help to better preserve your interests and mitigate any damage.