What’s the Most Dangerous Day of the Week for a Truck Accident? 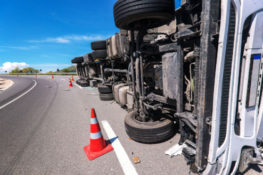 Texas has thousands of miles of interstates and rural highways that big trucks travel each day delivering goods. Here’s an alarming statistic: 12 percent of the fatal accidents involving large trucks in the U.S. in a recent year occurred in the Lone Star State.  In 2013, the most recent of complete data, Texas had nearly twice the number of fatal truck crashes as California, the state with the second highest total.

What day of the week is the most dangerous for an accident involving a tractor-trailer truck? If you guessed the weekend, you would be incorrect.

It’s true that Saturday and Sunday have the highest number of fatal car accidents, including many involving drunk drivers. But accidents involving large trucks were highest on Tuesday and Wednesday, according to the Insurance Institute for Highway Safety.

In fact, nearly 80 percent of fatal crashes involving tractor-trailers occurred on weekdays in 2013, the National Highway Traffic Safety Administration (NHTSA) says. More cargo moves over the road during the week.

Most of the weekday truck crashes occur during the daytime. Three-fourths of the fatal truck accidents occurred from 6 a.m. to 6 p.m.  The period between noon and 3 p.m. had the highest portion of accidents involving large trucks.

Unfortunately, too many dangerous truck drivers remain on the road even after they have had an accident. Fifteen percent of commercial truck drivers involved in accidents had previously recorded crashes—a higher percentage than drivers of passenger cars, motorcycles or light trucks, the NHTSA says. Meanwhile, 17 percent of truck drivers had at least one prior speeding conviction. Speed is a common contributing factor in truck accidents. Speed makes big rigs harder to stop and harder to control.

Regardless of who causes the accident, the people who are most often injured and killed are those in the smaller vehicles. Eighty-two percent of the people killed in accidents with 18 wheelers were occupants of other vehicles or pedestrians.

If you have been injured or lost a loved one in an accident involving a large truck in Texas, talk to a Corpus Christi truck accident lawyer about your legal options. Commercial trucking companies are required by Texas law and federal regulation to carry sizable amounts of liability insurance because large trucks have the potential to cause devastating injuries and fatalities in accidents.